Penzance! We were so excited to come to this place, after hearing it’s name so many times at Paddington Station when commuting home from work – the train on Platform 1 is calling at Reading, Swindon, Bath, Bristol, Exeter, Par, Truro and Penzance. It sounded so far away, I was always dreaming of this land called Cornwall, what it would be like to just jump on the train and end up hundreds of miles away. What did this place called Penzance look like, on the furthest edge of the UK on the map? Here is our story of when we finally went to Penzance back in 2013.

We had just spent a day in St Ives, and in the afternoon drove 20 minutes to Penzance. Again the roads in town were narrow, and parking was on street – thank goodness I had a mini. We found a space on Chapel Street, outside the cutest little shop called The Chocolate House. 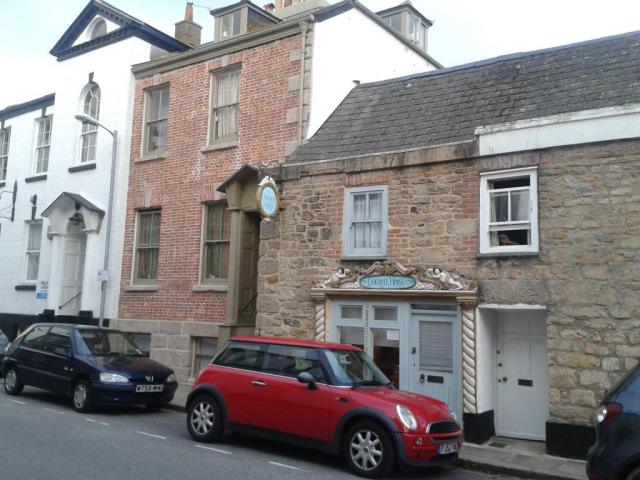 We stayed at The Artist Residence, the funkiest hotel I have ever stayed at. Here is the building from the outside, its red door really standing out. (By the way, they have now opened in Brighton and London)

Inside was so colourful, full of art, quirky furniture and each room was painted by a different artist. So cool! Downstairs was the large breakfast/chillout area for guests, and then the rooms were over 3 floors, the top floor being an attic conversion called the Sky Rooms. This is where we stayed, in Room 7.

As you can see, the room was so cool! With waves painted on all the walls, modern furnishings and the most comfy bed, there was a little ensuite and skylight windows with views of the sea (admittedly we had to tiptoe to see the view!). We set up Tyler’s travel cot by the bed and then set to exploring the town.

I don’t know what I expected from Penzance, but I think we were unlucky as the weather had turned a bit grey, which in turn made the buildings look grey. It was 4pm-ish on a Sunday afternoon and there were hardly any people around. We got a view of the sea though a car park though!

We found a shopping centre on Wharf Road, and was closed anyway being late-afternoon on a Sunday. There were a few eateries on the outside, so we ate at a deli that served pasta. We then walked around the high street, trying to guess which store was the old Woolies, and then walked back to the hotel to get Tyler ready for bed. The highlight of our walk was watching this bus trying to squeeze through the narrow streets! Seriously, it was scary, I don’t know how these drivers manage it!

Then next day we had breakfast in the hotel, admiring the cool decor. Even the bowls were colourful!

After breakfast we packed up and set off on a short drive to Lands End, Tyler having his 9.30am nap in the car. It was there that I read that Penzance was where the train line from London was built to end at, so in the olden days, Londoners could be brought to Cornwall and then travel on to other destinations from Penzance. So I can conclude that Penzance is the Slough of Cornwall (no offence locals, I live in Slough so often joke about commuter towns ;-))

Now I’m SURE there are nice things to see and do in Penzance, perhaps not on a Sunday, so if any locals are reading this, please do comment and let us know where we should have visited! I have also been told that nearby Mousehole is a lovely place to visit.

In next week’s Toddler Trips post, I will tell you all about our visit to Lands End 🙂

𝘢𝘥 - 𝘱𝘳 𝘱𝘳𝘰𝘥𝘶𝘤𝘵 👻 HALLOWEEN LOLLY KIT by @gooeyevents 🎃
ᴀᴅ Back to School lunches don’t have to be boring, thanks to @piccolocherrytomato. I have jazzed up Tyler’s favourite pesto pasta with them, it’s so simple to make!
YEAR 1 - THEN AND NOW : 2021 - 2017 - 1985
𝘢𝘥 - 𝘱𝘳 𝘱𝘳𝘰𝘥𝘶𝘤𝘵 Today we’ve got a sneak peek of something new to share with you, with it being Roald Dahl Day… this is the brand new George’s Marvellous Experiment Kit by @johnadams_toys.
One day we’ll have a house with flowers and a gate at the front… one day🤞Oh my goodness, walking around the Cotswolds was a dream! I must admit it took me half the week to actually switch my brain off and relax, but once I did, it was just so lovely to wander around aimlessly and enjoy the simple things. We are thinking of another break for October half term, but let’s see.
📚 THE STORY MUSEUM 📚