Can you believe I only have ONE photo of these two since I wrote the last Siblings Project post?! I guess I have been quite preoccupied getting photos of those magnolia trees instead. That not to say they haven’t been close this month – in fact I’d go as far to say as they are friends now. The conversations they have are so cute. And loud!

This photo is from World Book Day at Tyler’s school. Unfortunately Lily was a bit groggy as she had just woken from a nap. And that’s someone else’s sibling in the pushchair behind her. We were invited to read with our children to celebrate the day, rather than the kids dressing up. Tyler is wearing his Hungry Caterpillar picture that Lily helped colour in. 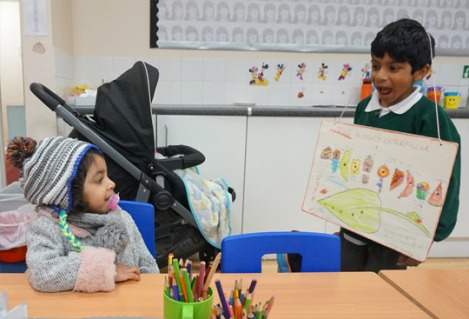 This past month has seen these two occupy each – they haven’t needed me. They wake early in the morning and Tyler puts YouTube on the TV. “Do you want to watch Peppa toys Lily?” “Oh yes, THANK YOU Tyya!!” – Other times it doesn’t go so well, “Oh Lily you always watch Peppa, I want to watch my things” And then there are the dominoes videos on YouTube that they both have been going crazy for, they laugh like its the most hilarious thing ever. Though Lily does exaggerate her laugh, and she’ll copy exactly what Tyler is doing – his laugh, when he jumps, where he sits.

In the evening after school, they chase each other around the flat, climbing over the sofa, playing hide and seek.

Lily has taken to mothering Tyler, running in to collect him from his classroom, pulling him out by the hand, making sure he’s zipped up and has a hat on “Tyya, where your hat!”

And when he was having his haircut at the barbers, she HAD to come, and then she was bossing him around “Tyya, head down!”

The other day, she was looking for Tyler, who was sitting looking out of the window. When she saw him, she said “Oh there you are, you little piggy! What you looking at?”

I need to capture some of their conversations on video – that’s my mission for next month. While they are being so cute. As I’m sure this won’t last forever!

🧳 Where to stay in Edinburgh?
🍭 CAMERA OBSCURA : WORLD OF ILLUSIONS 🍭
🚆 LONDON TO EDINBURGH with low cost train tickets 🚆
Part 2 of the “Favourite Toy” story. So after I told the kids the story of me losing my Bugs Buggy toy when I was little, I then forgot about it.
🧸 FAVOURITE TOY 🧸
Who is excited for Sing 2 to be out at the cinema? Us! 🙋🏻‍♀️ Can you believe it’s out next week - ahh!!