Every High Street has a past, and that includes Slough. In this post you will find loads of before and after photos of the shops in Slough High Street. Inspired by a photograph I saw inside the Daniel store labelled ‘Slough 1935 – 1956’, immediately I thought, was there really a Daniel store in Slough?? For those of you who aren’t familar with Daniel, it is a huge department store in Windsor that is 100 years old this year. It really is a part of Windsor. But the Slough branch, that got me intrigued.

I don’t recognise this store front from today’s High Street at all, so I suspect it may have been demolished when the Queensmere shopping centre was built in the 1970s. I asked in a local facebook group if anyone remembered the store, even though you would have to be in your 70s at least to be old enough to remember it.

A number of people said it is now Debenhams, but some say that would have been Suters at that time. Some say it was on the Crown corner (now the shops next to The Curve). Others say it was down an alleyway that led to the Cat Ballou Club, which was demolished when the Queensmere Observatory shopping centre was built. I had a look at some local history books at the library and I couldn’t see anything that resembles the above photo.

The Daniel photo got a lot of interest on Facebook, so I thought I’d share some before and after photos I did when we first moved to the area.

This building at 210 – 216 High Street was originally a Waitrose before becoming a Sainsbury’s. Recently it was a 99p store, then Poundland no.2 and now the store is vacant.

BHS – I still can’t believe this brand has gone from the UK high street. Slough’s branch was at 204-208, and currently vacant. 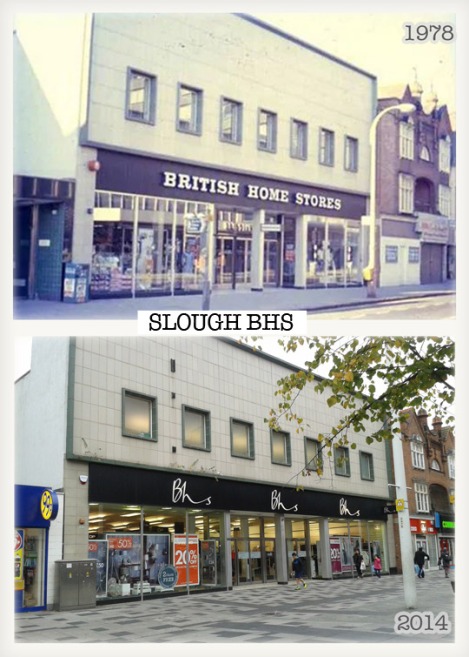 In the below photo, I had always thought the buildings had character, even if the shopfronts themselves were brash. Though it looks like even in the 1970s, there were vacant shops then.

At 190-192 was my favourite shop, Woolworths. And that is now Poundland and JD Sports.

At number 188, what is now Select was River Island, and back in the 80s it was Texas Instruments and Hall of Cards. And before that it was the Eagle pub.

Now on to the outside of the Queensmere shopping centre, Poundworld used to be Littlewoods. 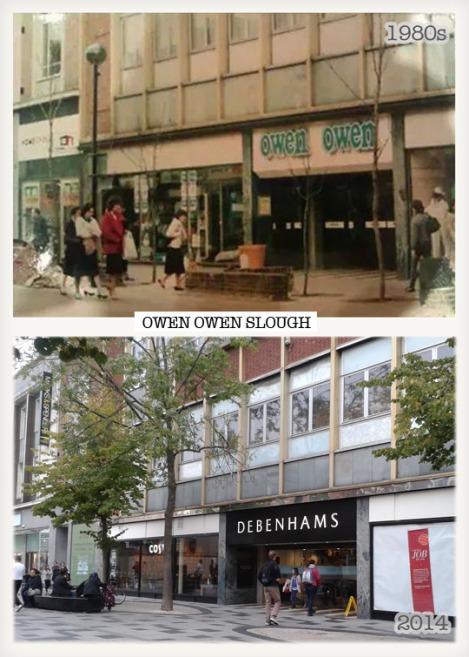 And before that is was Suters Department Store. You can see M&S to the left, now sadly vacant.

Virgin Media at 141 was H Samuel. Halifax at 145 was Burton. And before that, H Samuel and Dudd & Co was a pub call The Reindeer Inn.

Starbucks at 146-149 in is a rebuilt building, but it has been built exactly how it used to look. It used to be an Etam store. 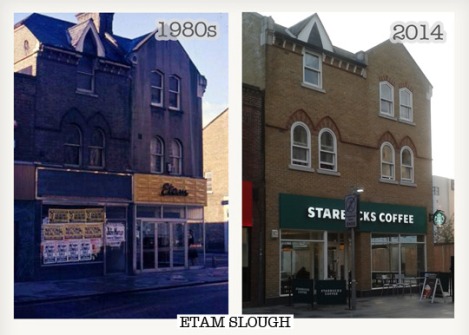 And then at the forgotten end of the High Street where Wetherspoons and all those estate agents are, well here is a before and after.

I hope you found that interesting. If you used to go shopping in Slough, do you remember any of the stores in the photos?

14 responses to “Slough High Street Then and Now”