I have been waiting 2 months to write this post, and finally the time is here! Back in August, I took part in the Christmas Tree Challenge for Style at Home magazine, to be featured in their Christmas issue. When I got an email from the team asking if I wanted to take part, I jumped at the chance! I LOVE Christmas! And to dress a tree, I am the expert!

For my first job after uni, I was in the Events Department at Woolworths HO, and I had to dress all the Christmas trees in each director’s office! I was so honoured 😀 The Christmas Tree buyer showed me exactly how to dress them, there were steps – you don’t just chuck the decs on! So I felt I was exactly the right person to dress a tree for this Style at Home shoot!

There were 6 readers taking part in the challenge, and each was teamed with a well-known High Street retailer to dress their tree and take part in a photo shoot. It took part over 3 days, and I was the first on Day 1. 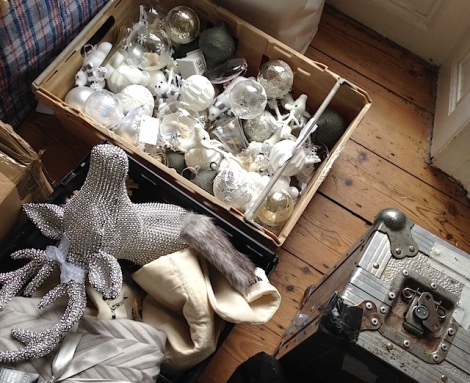 I was told to arrive at an address in London. It was on a residential street, and from the outside it just looked like someone’s home. A rather grand home at that. I thought, have I come to the right place?? I knocked on the door, and as soon as it opened, I knew it was the right place – suddenly it was Christmas in August! The Style at Home team were so welcoming, I felt at ease straight away. The rooms were being dressed and we were just waiting for the decs to arrive.

I went downstairs and had to wrap loads of boxes in my retailer’s theme to go under my tree. I was in heaven, it was ribbons, bows and strings galores – every crafter’s dream!

Next thing you know, it was time for me to go upstairs and start dressing my tree! There was a table of decs, and so many cutie ones to choose from! I won’t reveal the name of my retailer or the theme – you’ll have to buy the mag to find out! – but maybe you can guess 😉

And here was my fellow reader’s decs in the next room – can you guess which retailer? 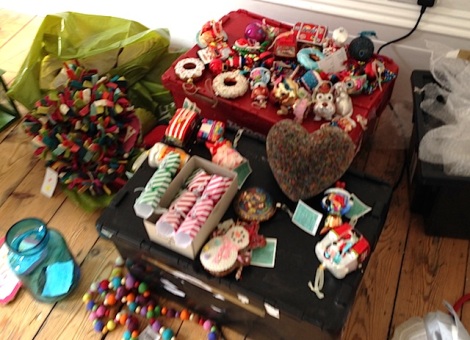 I really enjoyed dressing my tree, and it was actually me doing the whole thing my way! Then I got changed into my photo shoot outfit – I chose my favourite dress, the blue one with hedgehogs on it – and I got posing. Now I’m normally behind the camera, so for me this was such a new thing, to be in the limelight. It was so strange! Luckily the photographer was amazing and really made me feel at ease, so that I wasn’t nervous and it was really fun!

We had lunch afterwards and then I had to do a little video interview for their website – now that was nerve-wracking! Then I was done, so I watched the other reader do her tree and helped packed things away. We all had dinner in the evening and I met the other readers and PRs – everyone was so friendly and we all got along. All us readers added each other on Facebook to stay in touch, it was so nice to meet people I got along with straight away and had something in common with – a love of interiors!

When I got home, I felt like the whole experience was a magical fairytale dream! I was like, did that really happen?! I had to keep looking at my photos to convince myself it wasn’t a dream!

So now the time is finally here, the Style at Home issue that I am featured in is out on shelves next week! It’s out Wednesday October 28th – so buy an issue if you’d like to see the finished trees and which retailers they are from. I’ll probably be buying 10 copies, hah!

Tomorrow starts the last week of school at home, maybe EVER! (I mean, I don’t want to jinx it, but I feel like this is it). Even though I am sure everyone is sick of it, it has been nice knowing what the kids are learning at school and being so involved.
Yesterday morning, in Lily’s weekly video call with her class, she joined in for 5 minutes, then went “ugh” and lay down on the rug. Her teacher went “oh Lily are you tired?” Lily refused to talk and I went, “Nah, you’ve lost her” 😂
🌸 Friday Flowers 🌸 I actually feel like this week has gone really fast. Time always flies when you’re having fun. Well, at least it’s the weekend. Let’s hope the weather stays nice so we can enjoy being outdoors. Have a lovely day 💖
It is just me, but knowing we now have under 2 weeks left of school at home, I want to do things with them that we won’t be able to soon. Like go to a playground after lunch or play Pokemon Go in the woods. Okay, the weather has totally helped this week too. It has been lovely to be outdoors. Bring on the Spring weather!
First floral photo of the year - YASS!! My boy took this photo, my 8yo boy and I love him for it. Thank you Tyler! Here’s to feeling positive. Sunnier, longer days, spring flowers and an end in sight to all this virus stuff... literally. The park we were in today is directly opposite the vaccine site in Slough. So much hope that we’ll all be immune soon. I don’t want to jinx it, so I have all my fingered crossed 🤞
Yeah, I’m most excited about libraries reopening in April lol. Okay, shopping and all that other stuff too. In all seriousness, I’m just taking things one day at a time. I don’t like to look to the future too much as things can always change. But it’s nice to have hope. Hope you are feeling okay with everything.