In this post I’ll show you how to make a Town Signpost Cushion using applique techniques. It’s quite fun to do, and you can personalise it to the towns that mean something to you.

Just to give you a bit of background to this project, a couple of weeks ago, I had heard about the Hillarys blogger craft competition, with a chance to win £1000. If you’re curious, you can see the other entries on their Pinterest board – lots of talent out there! Anyway, I was intrigued, and I do love making things, although usually with paint rather than sewing, but I thought I would give it a go! They had 4 fabrics to choose from, and I went with the cute retro daisy print (official name – Daisy Pistachio). They sent me a 1m2 sample and the challenge was to create something with it.

This is where I was stuck for a while. I felt to be in win a chance of winning, it would have to be something really different and creative, I was thinking upcycled furniture or stuffed animals. Then I was like, I want to create something that I want in my home, something that I would actually buy. That’s how I got to the cushion idea, but not just a simple cushion, a personalised one that means something to my home. I saw something similar in Debenhams last year, featuring American Towns on a sign post. So I designed one that featured all the towns my boy has lived in the 3 years of his life – Brixton, Greenford, Uxbridge and Slough. They are not the most glam of places, so you definitely could not buy this in the shops! Here is a sketch of my idea: 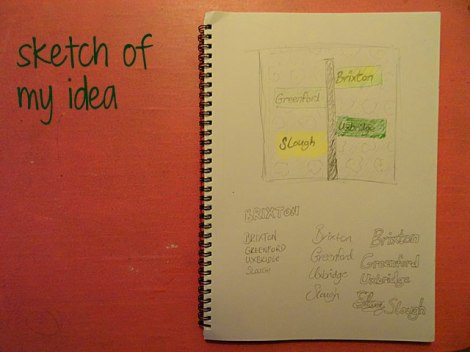 Next I had to buy some supplies, so I said to my boy, come on, we’re getting on a train to Windsor! He was ready at the door immediately, he does love trains oh so much. We went to C&H in Daniels, which is my nearest fabrics store. Now stepping in this store is like stepping back to 1970, and that’s including the staff. You do feel as though you have to whisper. Luckily Tyler had fallen asleep in the pushchair by now. I wandered around quite stumped, and then I spotted this scrap fabric stand by the till, 6 for £1 or 20p each. And all the scraps were shades of green – destiny! I also got a square of grey felt to cut my letters out of, a big batch of buttons from The Works which cost £1.99, and from Poundworld I bought embroidery thread and fabric glue for £1 each – bargain!

With the letters of the towns, I was going to do capital letters, but then I thought the handwritten look is more in fashion. This would be more tricky to do, but worth it. I drew out my letters on paper first, and then drew them backwards on to the felt using a Sharpie pen. Then I cut the letters out and placed in position on the fabrics.

I cut out the fabrics in the sizes I needed and ironed the edges so it would be easier to sew. I used an existing cushion cover as a template. I then ransacked my mum’s sewing basket, and found some velcro which I would use for the cushion fastening. So here are my supplies so far:

I used a cheap brush to brush fabric glue to the back of the letters and stick them on to the fabric. This required real concentration, and my fingers got rather sticky!

The next evening when the glue had dried, I pinned the fabrics in position ready for sewing. 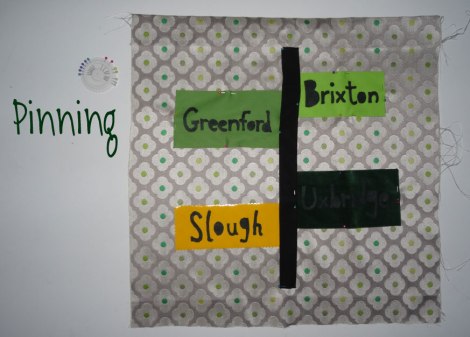 The following evening I chose a dark brown embroidery thread for contrast, and appliqued on the town pieces using running stitch. I wanted them to have a handmade look. The yellow pvc fabric was glued on using fabric glue.

I had to borrow my mum’s sewing machine next, so that weekend I took my fabrics and machine-stiched on the black signpost. I thought it would have a nice contrast being machine stitched next to the hand-stitched signs. 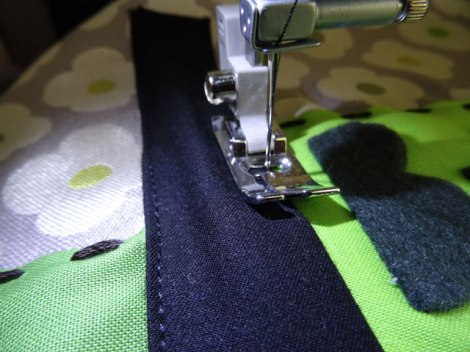 Here is how it looked after all the appliquing.

Back at my mum’s on Tuesday, I did the velcro fastening. I had cut the back piece of the cushion into two pieces, with a smaller section at the top. Then I machine stitched the two sides of the velcro to the two cushion pieces, as you can see here:

I thought something looked missing from it, and decided a black piping border around the cushion would bring it together. Where I work in Kentish Town is a lovely craft shop called the London Bead Co., where the bell jingles as you walk in. I love shopping in there, and the staff are so cheerful. I found a 2m strip of black cotton edging for £2.30. Back at my mum’s I machined-stitched it on the edge of the cushion squares. Then I machine-stitched the back piece on to the front, ensuring the black piping would be visible when I turned it inside out.

And Voila! Oh, this is where my boy just popped his head in while I tried to take a finished photo, going ‘I wanna!’ 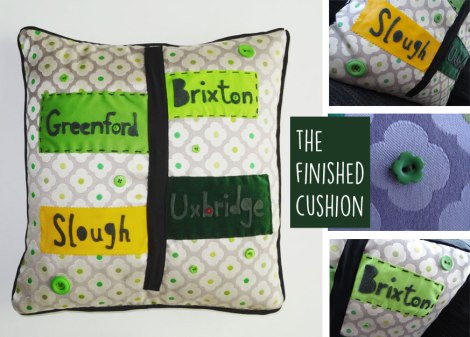 I am so pleased with it, it’s exactly how I envisioned it, and perfect for our home. Here are some home shots so you can see how it looks:

I hope you enjoyed this post and maybe are inspired to create your own Town Signpost Cushion!

Disclaimer: This is a competition entry for the Hillarys Craft Competition 2015

𝘢𝘥 - 𝘱𝘳 𝘱𝘳𝘰𝘥𝘶𝘤𝘵 👻 HALLOWEEN LOLLY KIT by @gooeyevents 🎃
ᴀᴅ Back to School lunches don’t have to be boring, thanks to @piccolocherrytomato. I have jazzed up Tyler’s favourite pesto pasta with them, it’s so simple to make!
YEAR 1 - THEN AND NOW : 2021 - 2017 - 1985
𝘢𝘥 - 𝘱𝘳 𝘱𝘳𝘰𝘥𝘶𝘤𝘵 Today we’ve got a sneak peek of something new to share with you, with it being Roald Dahl Day… this is the brand new George’s Marvellous Experiment Kit by @johnadams_toys.
One day we’ll have a house with flowers and a gate at the front… one day🤞Oh my goodness, walking around the Cotswolds was a dream! I must admit it took me half the week to actually switch my brain off and relax, but once I did, it was just so lovely to wander around aimlessly and enjoy the simple things. We are thinking of another break for October half term, but let’s see.
📚 THE STORY MUSEUM 📚