was so curious, as was my husband who actually took a day off work to attend our boy’s Preschool Graduation. It’s the end of Summer Term and this pre-school is changing ownership from September, so really it was a farewell party for the kiddies. The room was set up with seating in a square and carpet in the middle for the kids to sit on. Of course, did Tyler sit on the carpet? No! He really was a brat but luckily so was his friend who he was sitting next to in the back row! They wouldn’t wear their graduation hats either – ‘No like it!’ The hats had been handmade out of black card – I seriously LOVED the hats! I managed to get a photo using the selfie mode – he does like to look at himself.

The teachers stood at the front, called out each child’s name and handed them a rolled up certificate and a folder of their work. When it was his turn, I had to drag Tyler to the front (brat), whilst the others went so nicely by themselves. It was so cute.

They had a little disco after, there was a DJ and disco lights. The kids jumped in unison, Tyler sat on my lap. He was not taking part!

Then they had a lady entertainer. She sang songs for taking part in, like Row Your Boat. Tyler did not want to play row your boat. Musical statues. No. If you’re happy and you know it. No. What a grump. I was sat with him in the centre, and looked back at my husband in his pink shirt, who was looking incredibly bored. Then I looked at the other dad there, who was also wearing a pink shirt, also looking incredibly bored. That really made me laugh – dads!

Pass the parcel was next, or pass the teddy, Whoever got the teddy got a jelly baby. When Tyler got his jelly baby, he bit it and gave it to me saying ‘No like it’. This boy only eats chocolate. Then Capri Suns were handed out. After Tyler drank his, he really perked up. Ahh, there was my happy boy! He started running around the room, and didn’t stop, even through the next activities. His friend joined him too, and the two boys were running up and down the room.

A giant rainbow parachute was brought out. I think this was the most popular game of the day. We had to hold it at the edges and move it up and down. The children went nuts and ran underneath it, like it was the most amazing thing ever! The lady was desperately trying to get the children to stand at the edges, but it was impossible. I was like, hello, they are 3! Let them just run under the parachute, can’t you see how happy they are? Oh well.

There was a picnic afterward, but we said our goodbyes and headed off for lunch at nearby Cowley Lock. Everytime I drive to my parents’ to drop off Tyler, he shouts out ‘Look at all the boats’ as I drive over a particular hilly road. So today we actually went to that hilly bit. We had lunch by the canal, and watched the boats come and go. It was such a friendly place, everyone seemed to know one another. 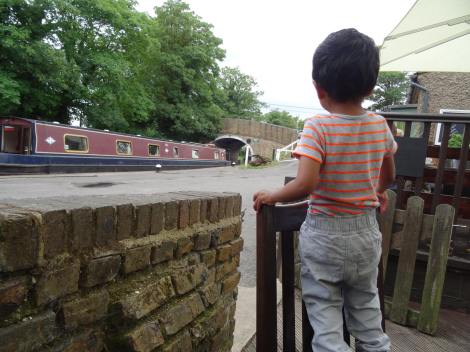 After lunch and lots of spilt drinks (wobbly decking plus toddler is not a good idea!), we went for a walk along the canal. It was so pretty, I can’t believe this has been near where I grew up all my life and I never knew about it. Still, I’m glad we found it now.

Further along the path was Cowley Recreation Ground, where there was a little playground. Tyler had a play on the swings, slide and roundabout while we sat in the sun. 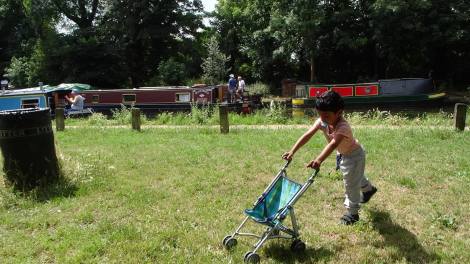 After that we headed back to my parents’ where some family members were there, as my cousin just graduated for real at nearby Brunel University. That was quite funny – a preschool graduation and a real degree graduation on the same day.

Anyhoo, that was it really, so if you have ever wondered what happens at a preschool graduation, I hope this gives you a glimpse. It’s a really cute idea, I’m so glad they did it. I know it’s an American thing, and they are not really graduating at 3 years old, but it’s all a bit of fun. And we love having fun 🙂

14 responses to “What exactly happens at a Pre-school Graduation?”

🎉 TEDDY’S PLAYTOWN BIRTHDAY PARTY 🎉
That secret playground in Windsor 😉
🎈And then she was 6! 🎈
💖 One year of Lily Age 5 💖
ᴀᴅ 💦 Splashpark Fun with @playmobil 💦
# 𝗔𝗗 We treated ourselves to dinner from Windsor’s Thai Square on Deliveroo. It came half-an-hour from when we ordered, right to our door. 🥳 The food was delicious, what a lovely family meal we had and it saved me from cooking! 😋