It’s nearly time to get your Christmas Tree out – 1 week to go! I thought I’d get in the festive mood by making some Christmas Decs to go on the tree. I do like the handmade look. Tyler and I got crafty yesterday and made these bits and bobs:

Earlier in the month, I got my November craft kit from Bostik / Tots100 and this time it had a definite snow theme. We had white glue, white blu tack, foam stars, snowflake stickers, a foam snowman, felt, coloured lolly sticks, curly ribbon and glitter card.

I decided I wanted something useful for the home from this kit, so that’s how I got to the Christmas Decs ideas. I was trying to do it without Tyler realising, but he saw me. “I wanna!” he said and tipped the box over the floor! So, I helped him make a snowman. Quite on topic, as we had just watched the Peppa Pig episode where they made a snowman, so Tyler was super keen. 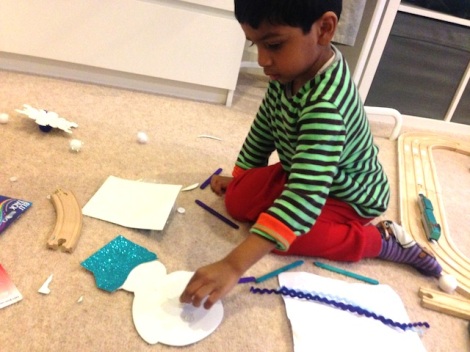 I put on blobs of white glue, and he stuck buttons on, and bits of felt for the scarf. I cut a lolly stick in half and he stuck them on as arms. I made a hat out of the glitter card, a nose out of felt and drew the face on.

Now back to the decs, basically I cut the felt into shapes, stitched together with embroidery thread in a contrasting colour and filled with a bit of stuffing. I stuck the snowflake stickers on two of the decs. I cut a bit of the curly ribbon to sew on as hooks to hang on the tree. There were also pom poms in the kit, so I sewed some thread through to put them together. Here’s what they look like: 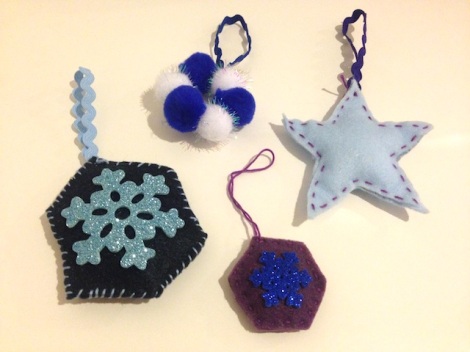 With the foam stars, I used glitter glue to make a pattern, and these can be decs on tabletops. 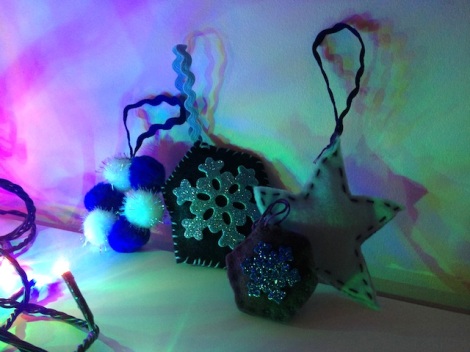 I can’t wait to get the tree out next and hang them up. And maybe we’ll stick Tyler’s snowman on the wall!

Are you feeling crafty this Christmas?

9 responses to “Make your own Christmas Decs #bostikbloggers”

𝚊𝚍 - 𝚙𝚛 𝚙𝚛𝚘𝚍𝚞𝚌𝚝 🚂 CHUFFY TRAIN MODEL KIT by @timber_kits 🚂
Nothing much exciting happens in Slough, but when Stacey Solomon’s new range arrived in our Primark, I was there in a flash 😆
Spooky, spooky donuts 🍩 I just couldn’t resist getting the new @krispykremeuk Halloween donuts. We tried Vampire Bat and Creepy Cobweb, both sweeeeeeet 😋
Where can you go inside a LEGO® Underground Train for free? At the @LEGO store in Leicester Square! I totally forgot to share this from our visit in the summer holidays, but our recent tube adventure reminded me. It is absolutely amazing in this store!
Giant roundel - it deserved a spot on my grid 😄
⭐️ BATTERSEA POWER STATION - NEW TUBE STATION! ⭐️