Totally winding down now at 38/39 weeks. The due date is THIS SATURDAY! Still I bet she will be late. Here’s what I got up to in my 6th week of maternity leave.

Day 36, Weds 15th – I was at my parents while Tyler went to preschool, and I had a productive morning threading elastic through the waists of Tyler’s jeans and shorts so they’d stop falling down.

Day 37, Thurs 16th – again at my parents and these gorgeous My Babiie changing mats that I had ordered came in the post. I love the chevron pattern. I got three, one for home, one for my parents’ house and one for my mother-in-law’s house. There was a thunderstorm in the late afternoon, and with bad timing a train had derailed at Paddington Station. My husband was stuck getting home as all GWR trains were cancelled. So we picked him up from West Ruislip and drove home. 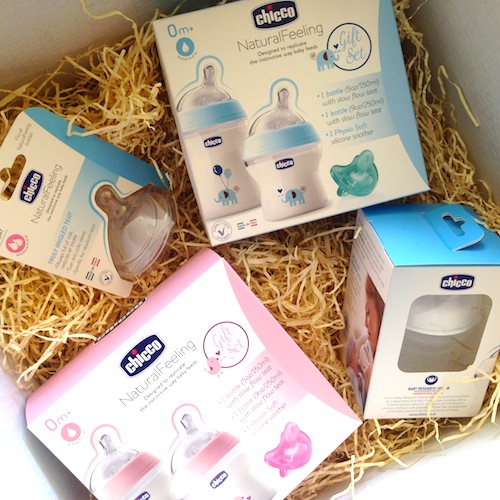 Day 38, Fri 17th – An0ther nothing day, I think I slept most of it. I got this lovely package in the post. I’m working with Chicco on the launch of their brand new NaturalFeeling baby bottles, which are exclusive to Boots. They’ve just come on sale this month. I love the different colours and the way the teat is angled, so there should be no air gaps when feeding baby – hopefully will minimize the chance of colic. Tyler had awful colic between 3 and 6 weeks and we tried Tommee Tippee and Dr. Browns bottles which did nothing! So we’ll see how these ones go. I’m planning to breastfeed for the first 6 weeks and then move to bottle.

That evening we picked up my husband again from West Ruislip and drove home as the GWR trains were still messed up! 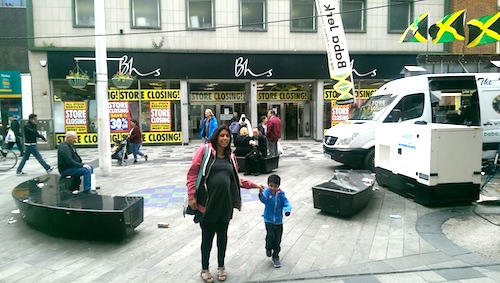 Day 39, Sat 18th – We went to Little Kickers in the morning and then Harris + Hoole as usual for our post-football snack. My sister met us there as she was staying over this weekend to spend time with Tyler. We went into town and I had to have a photo taken in front of BHS closing down, just like Woolies times. But don’t worry, I’m not going to start a BHS blog 😉 This is quite a significant photo as my mum tells me the day before she gave birth to my brother back in 1983, we were shopping in Slough – so she may in fact have gone into this BHS heavily pregnant with me as the 4-year-old – FREAKY!

Day 40, Sun 19th – it was Father’s Day, and we went to see Secret Life of Pets at Empire Cinema as they were having a preview weekend (it’s not officially out until next week). It was such a funny film, and Tyler loved it, sat on his aunty’s lap for most of it! There were a few very scary bits, so I’m not sure if we’ll get it on DVD as I don’t want Tyler to have nightmares, but still definitely worth watching.

Afterwards we went to the Red Lion in Stoke Pokes for lunch outside, as it was a nice day, before heading home to chill out. I made a little vlog of our weekend which you can watch here.

Day 41, Mon 20th – it was a miserable rainy day, so Tyler and I stayed in and played with trains. We had a Fire and Rescue train to review for Bigjigs, as we are Play Patrollers, so we did that too.

I made chilli con carne for dinner and watched the Sewing Bee in the evening.

Day 42, Tues 21st – I woke up with terrible lower back pains which got worse throughout the day. I knew this was going to be another day indoors with Tyler, which was a shame as it was really sunny in the morning. Normally I would have taken him out. But he was happy to play with his trains and have pillow fights with me! He even did a bit of pregnancy yoga with me (following a video on the TV) – ‘that was fun!’ he said! In the afternoon I started having Braxton Hicks contractions. I had no idea if this with the back pain was a sign of early labour or just a late pregnancy symptom. Well I went to sleep and nothing so I guess it was just a pregnancy symptom – boo.

I’ve now 3 days ’til the due date – just a waiting game now!

𝙰𝙳 🍔 FLAMING COW - ETON, BERKSHIRE 🍔
Just had to pop a post on here to remember the day the Elizabeth Line Central London section opened! The Elizabeth Line is the reason we moved to Slough many years ago, so it actually felt super exciting to finally ride the Central London bit today.
🚌 Vintage Bus Days 🚌
🌺 Langley Country Park Rhododendrons - just OMG 🤩 This is me telling you to go now. Now now! It is a colourful floral land of magic at the moment. The colours seem never ending as you walk through Temple Gardens, it’s soooo beautiful!
It’s not everyday you get invited to an awards show, and then the company you’re representing goes and wins!! 🤩
Following on from my Southend reel yesterday, I wanted to share pics from @teawiththetide. The cafe is at the end of Southend pier - the longest pleasure pier in the world, 1.33 miles into the sea (well, Thames Estuary). It is so cool to have a coffee literally in the sea!