What are you cooking tonight? It’s a question that is often asked among my mum friends on the school run as we pick our little ones up, and then can’t think what to cook when we get home. Sometimes I feel like I can’t be bothered, other days I do feel in the mood for cooking, but it’s hard to cook a top notch meal from scratch whilst looking after a baby and a school-kid.

It was perfect timing that I was challenged alongside my fellow bloggers to come up with a mid-week meal by Dolmio and Britmums. It’s called the #Thankgoodness challenge…

“It’s a Wednesday – everyone’s busy, everyone’s hungry, everyone needs to eat well – how do you meet the regular challenge of creating a balanced mid-week family meal that results in clean plates?”

They sent me a Tesco delivery of groceries – 2 x Dolmio jars, spaghetti, cannelloni, chickpeas, kidney beans, soya protein, frozen spinach, parmesan cheese, cheddar cheese, carrots, mushrooms, aubergine, courgettes, red pepper and onions. It was the first time I had a Tesco delivery, as usually we go in store, and a nice chap brought the groceries up to my flat.

Now, for someone like me who usually bungs things in the oven, I was like, what do I cook with all these fresh things?! Well I first thought, all this is not for just one meal, so I went with using the fresh things first. So I chopped up a courgette, aubergine, red pepper and an onion, and roasted in the oven for 45 minutes.

Then I picked up Tyler from school and when we got back, I cooked the soya mince and chopped mushrooms, and then stirred through some Dolmio bolognese sauce before adding in the roasted vegetables. At the same time I cooked some penne pasta.

So in the end I had made a roasted vegetable pasta bolognese dish. And I made a baby version for Lily, which was the penne pasta with some of the veg, as I don’t think babies can eat soya protein. Here is the result! 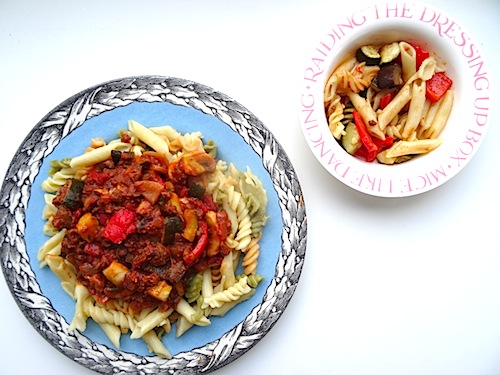 I tell you what, Lily ate all of her little bowl of pasta, though she wasn’t a fan of the aubergine! My husband and I loved our dish, it was really filling too. I’m not going to lie, Tyler only eats plain pasta, but he does eat his vegetables on the side. Being a fusspot, he only likes the usual – brocolli, carrots, green beans, sweetcorn, peas. Who knows, one day he might like courgettes and aubergine!

Not having to make a tomato sauce from scratch did make things easier, and it’s reassuring to know that a jar of Dolmio Bolognese Sauce has at least 10 juicy diced tomatoes, a dollop of tomato puree, half an onion, a tablespoon of sunflower oil, a couple of cloves of garlic, a handful of herbs including basil, a teaspoon of cornflour, a teaspoon of salt, a pinch of pepper, two teaspoons of added beet sugar for taste, a squeeze of lemon juice, a splash of water and nothing more. In fact, a jar provides a family of four with one of their 5-a-day each and that’s before you add any further veg to the meal!

On the Sunday I made another meal from the ingredients – Spinach and Cheddar Cannelloni. That’s right, I used chedder cheese instead of ricotta! It was the first time I cooked cannelloni, and it was fiddly putting the spinach filling inside each tube, but still, you have to try these things, right?! I put the filled tubes in an oven tray, topped with Dolmio sauce and grated cheese and baked for half and hour. It tasted quite good actually, so good that I forgot to take a photo!

Anyhoo, those were my meals – hope that gives you some mid-week family meal inspiration!

4 responses to “Mid-Week Meals with Dolmio”