Mmmmm Horlicks – reminds me of my childhood and having a hot drink just before bed. I love the smell of it. The first time I saw the factory was from a train window on a daytrip to Reading, and I went WOW! Those big red letters, you could not miss it. Move forward 15 or so years and I am living right by the factory, walking behind it every time I do the school run. When I heard they were opening up to the public for a heritage tour, I was the first to nab a place – I had always wondered what was inside this building. Especially with the news that this factory, which has been in Slough since 1908, is closing down, this would be the last chance to get a peek too. 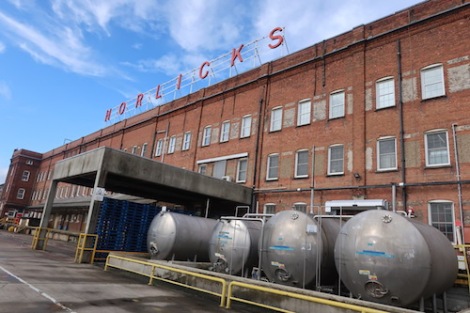 In this blog post, I will share with you what I learnt and what they showed us, and I have also made a little video which you can see at the end of this post. Firstly, the entrance to the reception is grand for a start. The doors are large and black, quite intimidating from the outside, I almost felt nervous walking through. Luckily I bumped into one of my readers, so it was nice to have someone I know there!

Inside we were given visitors badges and led up the stairs to an original boardroom on the first floor. The room was full of antique wooden furniture, what I later learnt was Mouseman, very beautifully carved and very valuable. Each chair had faces carved into them, and a mouse carved into a chair leg. 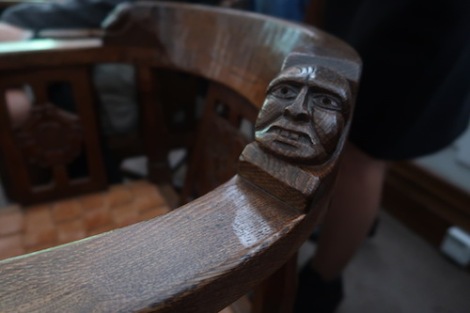 The room had many original art deco features, and paintings on the wall, though not of the original founders William and James Horlick.

We were given a presentation on how Horlicks started with pictures of the factory from the outside when Slough was just fields. I found this fascinating as I walk though these ‘fields’ every day to take my son to school, except this area is full of houses and cars now, a complete different world from this:

You can see that the factory had it’s own train line leading off from the main GWR line – a main reason why this site was chosen for the factory. Close to London, close to a train line and close to water. 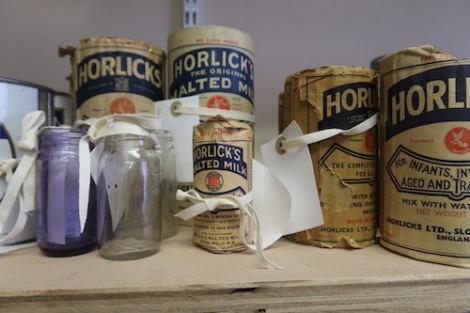 We were told how the idea for Horlicks came about, as milk was not sterile in the old days, there were no refrigerators. So this drink made from malted barley and wheat flour was marketed to be safer, that you won’t die if you drink it. And it was also marketed as infant food – perhaps an earlier version of formula.

The room next to the boardroom was an archive room, You see a desk as you enter with lots of vintage bits and bobs, original journals and photographs. This interesting piece was on the desk, I have no idea what it is:

There were shelves full of old Horlicks containers, beakers, jugs:

And even something the kids would love – toy trucks! 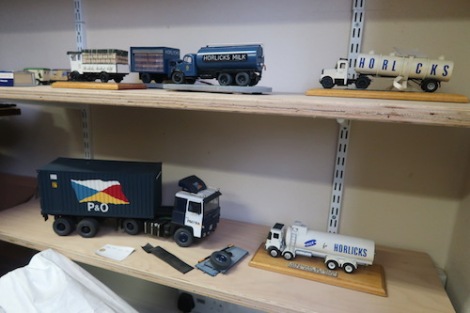 This made me laugh, a very 70s ‘Home’ book made by Horlicks. My mum had one of these from the milk people, it had everything inside from DIY, how to sew through to the stages of pregnancy! 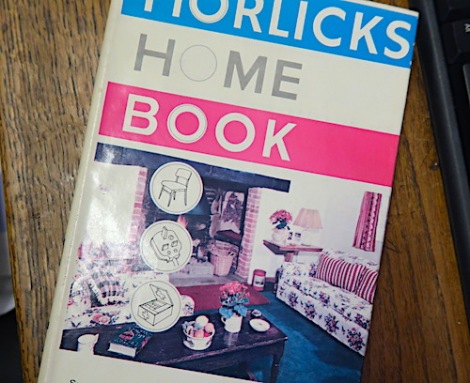 We had a look at two more rooms, with more Mouseman furniture inside, and the last room had original paintings from vintage adverts you may recognise. I actually gasped. You could see the brushstrokes. ORIGINAL HORLICKS PAINTINGS!

Next we were given pink tabards and hats to wear as we were going to look at the factory from the outside. Unfortunately we were not allowed inside the manufacturing bit as it would be too dangerous (gah!!)

It was nice to get this close, as normally you can only see this from afar. The letters do look really grand close up. 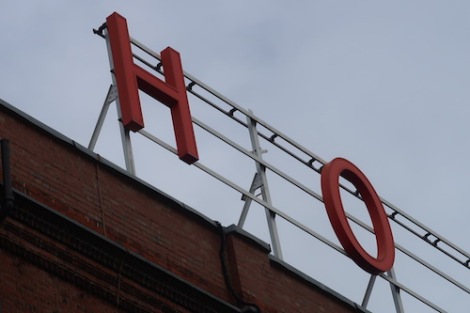 We could see the track line on the ground where the train line used to be, and you could see how close the factory is the the main GWR line. Like it’s literally right next to it.

We were told a bit more about the history, where extensions were made, and how the factory had to be made a bit pretty and Price Edward (in the 1930s) did not like that he could see a factory from Windsor Castle. So that’s why the factory has these turrets or whatever they are called!

The clock does not work as it’s too expensive to repair. And you can see from this photo that the clock used to be lower down from the circular shadow where the window underneath is. The bricks of the chimney had to be replaced with blue brick – I can’t remember the reason. 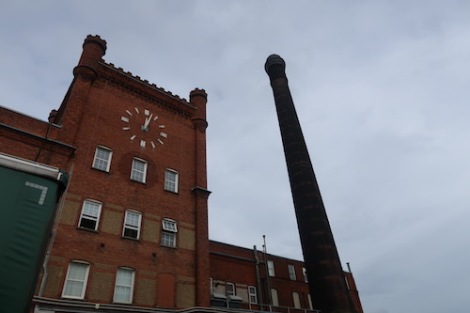 It has recently been in the news about this factory closing down, and at the moment they don’t know what will happen to the building. It is a building of local interest, rather than a listed building, and it is hoped that all the historical pieces inside will be preserved.

As for the factory, there are no answers, but there is this petition to get the building listed and preserve it from demolition. You can sign it here: Petition

I made a little video too about the heritage tour:

So that was what I learnt from the heritage tour. It was absolutely fascinating having a look around, and just wonderful to have a piece of history here in Slough. You can read a bit more about the official story of Horlicks , and if you want to have a look at the factory from the outside, just take a walk down Stoke Poges Lane in Slough – it really is a ‘WOW’ building.