Tyler is now 5 years and 10 months (nearly 6 😱) and Lily is 20 months. Even though there’s 4 years between them, the age gap seems to get smaller as they get older, maybe because Lily is in such a rush to be an independent woman 😂

I’m a bit late writing this siblings update, but it has been a jam-packed month for these two. Well, February Half Term was anyway, with a train adventure nearly every day. Lily is now a very confident walker, so although I do bring the buggy along, she likes to walk everywhere. More recently she has started running rather than walking, as if she is trying to beat Tyler. She pretty much walks all the way to his school, which is about a mile away!

Here are the two at Hammersmith – Tyler’s idea of a day out after he watched a YouTube video of a train going to this town and that was it, we had to go! 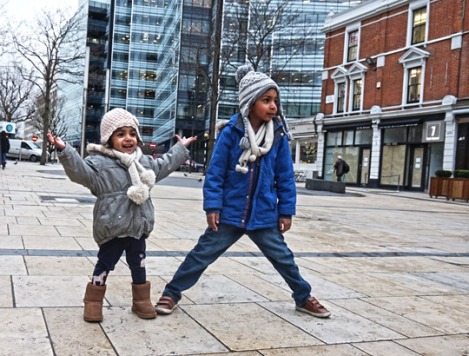 We went from my parents’, which meant we got a bus, a GWR train and the Hammersmith and City Line train, and on the way back we got a Piccadilly line train and a bus back from the airport! So, that was Tyler’s train fix and Lily found it all exciting too. 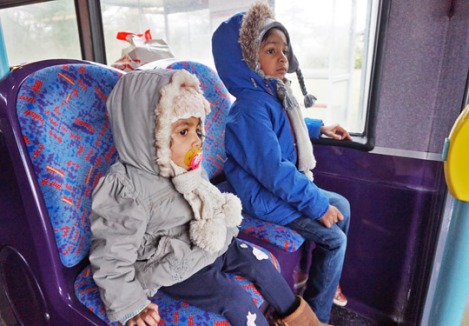 There were plenty of giggles and running around. Here Tyler is making Lily laugh by going peekaboo – his idea.

We had another tube adventure to the other side of London to meet friends, and the kids got to go to a playground for the first time in aaaages. They had so much fun.

The following day we got on an electric train to Didcot, which I wrote about here, and to end the week we visited friends in Hampton where the kids played in the park until the sun set (which is getting later now, thank goodness!).

The few weeks after half term were a bit quiet, with school and both me and Lily getting a chest infection. But each weekend Tyler asked to go on the new GWR high speed electric train (I think it’s called the Intercity Express). He waited so patiently as each weekend I said next week. We finally went on one yesterday when we hopped on a train to Reading, where the kids did some train-spotting from the bridge. Both of them were excited, it amazes me how much of a mini-Tyler Lily is, with her shouting out ‘Tain!’ and ‘Choo choo!’ at the trains, and ‘Quack Quack’ at the pigeons. We got the new train back to Slough, so now Tyler can tick that off his list. And we did all this without the buggy, it was much easier to hop on and off trains that way.

There’s been lots of chasing each other around the home, I’m always hearing the sound of footsteps and laughter. But there’s also meltdowns here and there, still to do with Lily accidentally breaking train tracks when she pushes trains over them, which makes Tyler go mad! Lucky for Tyler that Lily likes trains and is okay with watching them on YouTube, though sometimes they don’t agree when Lily wants to watch Peppa.

Other than that, they do everything together, reading, colouring, sitting on the sofa, watching trains and buses out of the window, sitting at their table to eat, watching TV in bed and falling asleep together. Whilst sometimes they give me a headache, seeing them enjoy each other company is such a joy. I am so glad that we gave Tyler a sibling.

It’s not very often I’ll wear a sari but I’ll make an exception for my sister’s nikah! 💕
☕️ 🍰 🥛EnigmaEton 🥛🍰☕️
📚 ROALD DAHL MUSEUM 📚
One more last day of school photo - because why not! Schools out for summer 🎉
Last day of school vs First day of school (scroll to see the pic) - where does the time go?!
💦 LAMMAS PARK SPLASHPARK 💦