I moved to Slough exactly 4 years ago, it was May 2014, and we had chosen this town that had a not-so-good reputation because of the promise of regeneration. I wrote a post all about our reasons for moving here a year later, and it was all full of excitement for what the town might become. So, 3 years since I wrote THAT post, how is the regeneration coming along? Well, I thought I’d share with you some photos that I took on a sunny day this week – no filters, no editing, this is genuinely how the new buildings are looking. 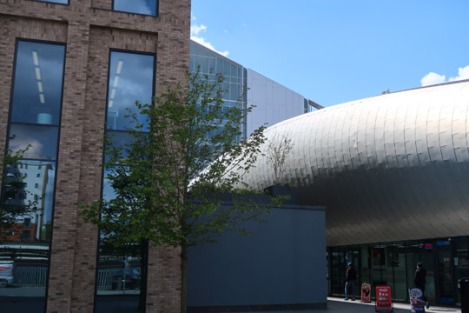 I’ll start with how the skyline has changed – this is looking towards the town from the railway bridge. What you can see is the new Porter Building which is complete, the bus station next to it (you can just about see the roof), 2 Brunel Place in the centre which is near completion, St Ethelburt’s Church next to it and then the Curve Library and Cultural Centre on the far right. Just cut off from the photo is the building site for a trendy new hotel called Moxy.

First off is the Porter Building which is on the site of the old O2 Head Office, directly opposite Slough train station and next to the bus station. When we moved here in 2014, we could see the empty old office out of our window, with moss growing all over it. It was ugly and unloved and it was like that for a year. Then we watched it get demolished which seemed to take another year. And then they built this brand new building super quick and it was finished towards the end of 2017, all shiny and modern, and we can see a roof-top terrace. But what I am most excited for it the new Starbucks that is opening here in June – ahhh! I’m guessing it’s going to be in the bottom left corner, where the white window stickers are, to catch commuters.

I love the contrast of the new and old architecture. The roof of Slough train station is beautiful and I am glad this building has been left alone – though it could do with a clean.

2 Brunel Place dominates the skyline – it is a huge office with an angled roof that’s not quite complete yet. And they are working on the space next to it at the moment, it might be a road to the bus station – the bus station that was the first of the regeneration to be completed many years ago. You can see the bus station to the left of the below photo, and 2 Brunel Place in the background. Big isn’t it?!

You can see it from the Curve also. I took this photo last week, as again I liked the contrast of new and old architecture – this is St Ethelburt’s Church. The Curve is still looking new, nearly 2 years since it opened, and is a real success story. It really has brought people together and has brought arts to Slough with performances in the Venue. 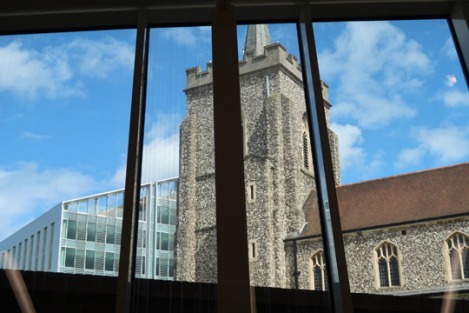 With regards to the shopping centre redevelopment, NOTHING has happened so far. We are waiting and hoping in the meantime for our Slough Westfield 😛

Next to The Curve is the site of the old library which was demolished nearly 2 years ago. Finally some boards have gone up, but work is still to start on building this new hotel called Moxy. The mock-up photo of the building looks really modern, have a look here.

Across the road from this is the old Thames Valley University site – two ugly, abandoned buildings that have been there for a long time. This is the next Heart of Slough project – they will be building residential units, offices and leisure/retail space. These two buildings should be demolished this year and then they will start on this. 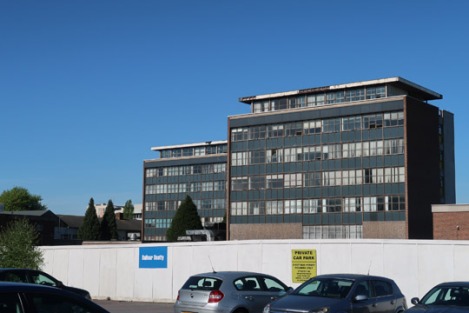 There is also another leisure facility being built at the old Absolute Ten Pin site by Salt Hill Park which should be opening later this year. I haven’t walked that way in ages so I don’t know how it’s looking.

And on the other side of the train station there are quite a few residential developments being built. One is Vanburgh Court on the old Nissan showroom. At the moment we can see the steel framework being put together. Next to that is the old DVLA test centre which is going to be more flats. And then a little further along is the old Sikh private school that is being turned into Iron House – more luxury apartments. This is how it is looking at the mo.

So that is how the regeneration is looking – very shiny and a work in progress. Still I would like to see the roads resurfaced and pavements repaved along Stoke Road. The front of Slough train station looks nice, but the back is pothole central. Crossrail is supposed to be here next year, so it better be done by then!

What do you think of the regeneration so far?