As the Nursery year has come to an end, I can now look back and see how much Lily has learnt and grown from her time there. It really was the best decision to send her to the nursery at her brother’s school.

When Lily started Nursery in September 2019, at age 3 years and 2 months, she was literally just out of nappies. There were reasons why I hadn’t potty trained her earlier. Believe me I tried but it was meltdown central and I needed my mum’s help in the end. Anyway, potty trained for just a week, she started Nursery wearing her big girl pants, her trusty jeggings, fave colourful hoody and Minions shoes. She refused to let me tie her hair up or even brush it, so it was down with her curls all over the place.

Her first day was just half-an-hour with me there, and then after that it was 3 hours on her own. She did have a few accidents on the first two days, so at first I took her to the loo at Nursery before she started her session. There was a cubicle at the end that had red step and seat, and that became the loo she preferred. Before long she was going there independently and there were no more accidents from like the second week. I couldn’t believe how quick that nappies were no longer in my life! Going to Nursery definitely helped with that.

Picking up Lily from Nursery always made me smile. The class would be sitting crossed-legs on the carpets, having drank their cartons of milk, and she would jump up when she saw me. There was always a piece of paper of her work, usually a picture of Peppa Pig or Tyler.

There were lots of choices of toys to play with, a chill-out corner with books and a TV screen, a huge outside playground that was just for Nursery. Lily loved it. In the first term she had a best friend. I used to hear him calling out “LILY!!!” in the afternoons when we would pick up Tyler, and he was picking up his older sibling. So Lily and this boy became best friends, and she would tell me how they would play in the outside playground and have pretend ice creams from the ice cream van, and have imaginary train trips to Windsor. Then… he left as the family moved up north! It was okay, she made new friends, but never forgot this boy. 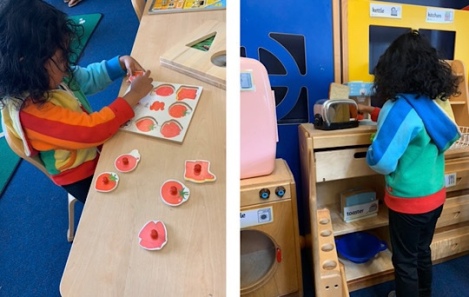 Lily was very close to two teachers and often talked about them. She loved to show them whatever outfit she was wearing, and which character was on her top – Peppa, Poppy and in the later days Elsa. It’s thanks to her teachers that she became more confident and learnt to write her name. I was so shocked when I could see she could write her name!

She learnt so many songs from Nursery, and we got to hear them in their Christmas performance. The hello and goodbye song with sign language. Days of the Week to the Addams Family tune. As well as the usual Jingle Bells etc. Lily still sings all the songs.

I was happy that Lily was now talking to people other than her family. In playgroups she was always playing by my side, so it was a big deal that she could cope without me. At first she was sad, and she would cry, “Mummy I want to play with YOU”. It would break my heart and I would feel like crying. But we found other ways to get our time together. After Nursery I would drive straight to a Costa, or the Krispy Kreme shop, sometimes even get the train to Windsor. We would do magazines together, make insta-stories on my phone – but mostly lots of colouring. I always carried around a pack of crayons. We  would still have 3 hours before we had to pick up Tyler, so our mummy and daughter time did not end.

And once a week we would have an after-school date that included Tyler. We would hang out in Gerrards Cross, colouring in at Caffe Nero after a little mooch in the charity shop.

We were part of a reading group, and once a week I would come in and we could sit together and listen to a teacher reading a story. At the end Lily would choose a book to take home – and it was always a Peppa book. She tells me now that that was her favourite memory of Nursery.

Nursery showed Lily how to brush her teeth properly, and wash her hands properly when coronavirus came about. When homeschool started, we were sent this timetable. I didn’t stick to this at home, but it is nice to see what they might have done at Nursery.

Lily had nearly 7 months of Nursery – it came to an unexpected end in March when coronavirus appeared. I took the below photo on the Monday of her last week for the blossom tree. I did not realise it would be her last photo at Nursery. Her last day was a Wednesday as I was panicking – there was a suspected case at the school which later turned out to be a false alarm. And in my panic I didn’t take a last photo of Lily with her teachers. To be honest I thought coronavirus would go. I actually said to the teachers, “See you in a couple of months”, expecting things to be back to normal by May/June. WRONG! So… this is her last photo 😦

Her teacher was amazing at staying in contact when we were in lockdown, sending the children activities and stories. It was lovely to be able to email in Lily’s drawings, and for me to read out messages to Lily. They did make her smile. She talked about her teacher a lot when she was at home, including when her teacher’s birthday is and how she doesn’t like Wotsits lol –  I am so amazed by how much detail Lily remembered. You can see how a teacher can have such a great impact on a child.

And that is why I am so glad I send my child to Nursery. Thank you teachers – you do such an amazing job.