Now, you all know by now how much we love a trail, so when we saw a map of the nature trail at Denham Country Park, it just had to be done. I have previously written about Denham Country Park and it’s fabulous playground, so do check out that post for more information. This post will focus on the trail only, that Tyler and I did on our own this time. It’s a 2km trail that is very scenic and we only got lost once, haha. I think the map is actually drawn wrong, so I have labelled it with what we found – hopefully this will help you if you try the trail one day. There are 10 brass rubbings to find which makes the trail more interactive – remember to bring paper and a pencil to do them.

These are the details for the Denham Country Park:

Parking: The car park is on Denham Court Drive – a long and windy country road. There are two car parks, one on the left and one on the right. The one on the right has more spaces. Parking costs £3.70 for 3 hours (£2.70 in off-peak season), and it is open everyday until 7pm.

Toilets: Yes by the cafe/visitor centre.

Food: Cafe at Colne Valley Visitor Centre that is take-away only for now. Fran’s Tea Rooms at Denham Deep Lock.

Pushchair-friendly: There are no steps, although the path by the canal is narrow. Should be okay with a pushchair.

I have updated the map with where we found the brass rubbings, and where the path actually went. We only found 6 out of the 10 brass rubbings, so there are 4 more mystery ones somewhere on the route. I have to add, I’m not sure how old these brass rubbings are, but some had birds poop on, so we used our hand sanitiser regularly.

The nature trail starts at the totem pole by the overflow car park. With the totem pole facing you, you will see a path behind it. Walk on this path and you’ll see the first brass rubbing pretty soonish.

The next one was just up ahead, and then a bit further along the third one. The first 3 brass rubbings were quite close together

As we were walking along here, there was a large pond to our left with quite a few viewing platforms, and a meadows to our right with brown cows chilling in the grass. It was all very pretty. 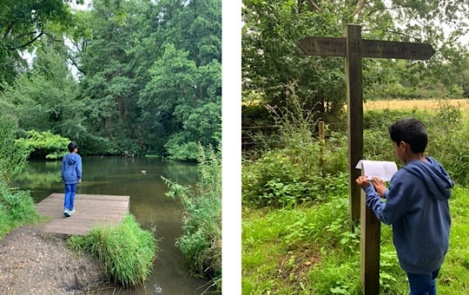 We kept walking down the path until we reached a gate, and the fourth brass rubbing was there.

There’s a path to your left here but don’t go on that. Go on to the bridge in front of you. This will take you over the River Colne. The bridge is very narrow.

At the other side of the bridge is the Grand Union Canal. Here, turn LEFT towards Denham Deep Lock. 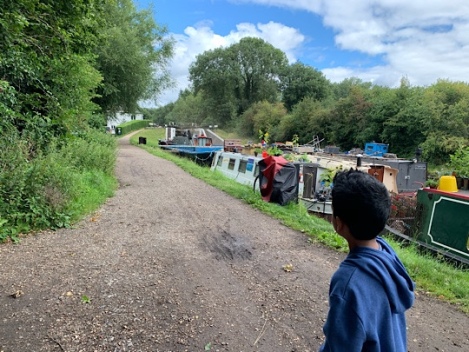 There’s a lovely atmosphere here as there are a lot of boats, some playing music on the day we were there. Tyler wanted to sit and watch the people work the lock, so we were here maybe 10/15 minutes. I had my Pokemon Go to occupy me – by the way, there are so many Pokestops on this trail… if you play it, you’ll know what I mean!

Look at all the seating in the garden (We did the trail on a Tuesday so it was closed).

On with the trail, we carried on walking up the Grand Union Canal but could not see any brass rubbings. I used my Pokemon Go app to help, as some of the brass rubbings were Pokestops on their map!

We reached a bridge and turned left before it onto a wooden footbridge, then left again. This is the part of the map where you are doing a U-turn.

Walk along the path, through the trees and the path bends. Here we found our fifth brass rubbing.

After the heron, we kept walking at saw a bridge. Just before the bridge was the sixth brass rubbing.

After the bridge (where Tyler was reading about a lost dog), the path forks into two. The one straight ahead led into what looked like a building site. I wonder if the other brass rubbings were that way. We turned on to the path on the left and it led to the Robin brass rubbing – number 3. So we had come full circle. Or not quite full!

We walked back to the start, happy to have found 6 at least. We do like a challenge, and Tyler was very happy. He wants to come back with Lily as he thinks she will like watching the boats at the lock. And I think their Dada will like the walk too, it’s perfect for families. The trail took us 2 hours because we took one wrong turn, we watched the lock and were playing Pokemon Go. But if you are just doing the trail, I’d say it would take 1 hour max.

When we came home, Tyler made a little collage with of his brass rubbings as a keepsake. Cool, isn’t it 🙂 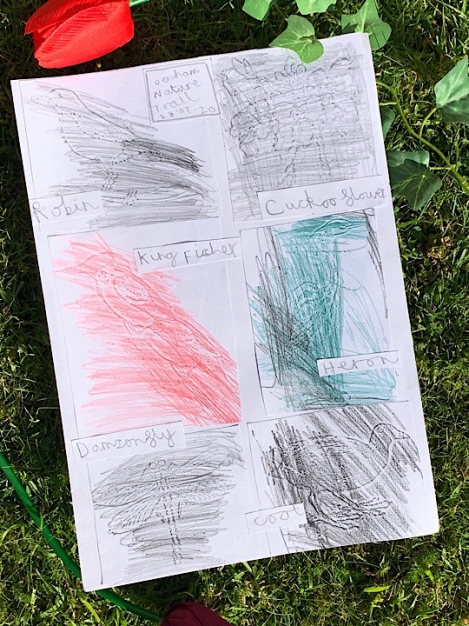 Why don’t you have a go at the nature trail? Maybe you can find the 4 brass rubbings that we missed. If you do, please let us know where they are!