On Friday night (11.30pm) my uncle came to visit. He’s on holiday. I’m glad it was late because it was the best Big Brother night ever. I was chanting ‘Get Grace out!’ with the crowd! So the next day next day I had to take my uncle to Kings Cross so he could catch his train to Leicester. The station has totally changed since I last went there, I was so freaked out by the platform on the Met line, the old ticket machines have disappeared and look like this now:

As I was in London so early in the morning, I decided to catch a train to Southend and have a day of fun in the sunshine. As it was the first England World Cup match that day, I hoped it would be quiet on the beach, but it was still packed! I had my beach towel,so sat on the beach eating my M&S caesar salad and reading my book. It was nice! Then I went shopping! 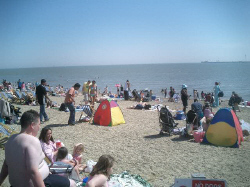 The next day was just as good, me and G chilled in the local park with ice creams and I even kicked a football! Then we had a BBQ which was loads of fun. We cooked the chicken and veg on sticks that I got from Iceland in the morning. I walked to Iceland from my house and it only took 20 minutes. Wow!

2 responses to “My Sunny Weekend”