This time last week, me and G were on our was to Torquay! It was the most beautiful place I have seen in England, I want to live there! The Hotel was called Livermead Cliff, typical seaside hotel, set in the 80s, the bathroom suite was avocado. nice! It all added to the seaside feel. We had a beach just outside, pretty much private as hardly anyone was there (see picture). It was so pretty. Walked across the beach to Torquay town centre, and a girl on a bike said hello to us. That was unexpected! The town was pretty too, all on a hill, one minute you’re at ground level, the next you’re on the roofs without realising. It was weird! We went to a local bar were there was a pub singer and the people were so friendly! We weren’t used to that! 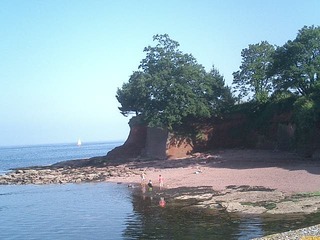 Next day we lunched on the rooftops of the Pavilion shopping centre while people sunbathed below. Then we went to our beach and climbed over the rocks to get to anothe beach – mini adventure – but the sea came so quickly that the beach was disappearing! It all happened so quick. That night Nikki got voted out of Big Brother so I decided never going to watch it ever again. We went out to town. While waiting for the bus, the sea waves were coming over the walls where we were sitting on the beach only 2 hours before! The bus was full of chavs, like i was in hayes, but they were nice chavs. One of them picked up a lady’s jacket that she had dropped to give it to her. And one said sorry when she bumped into me. Nice chavs?! 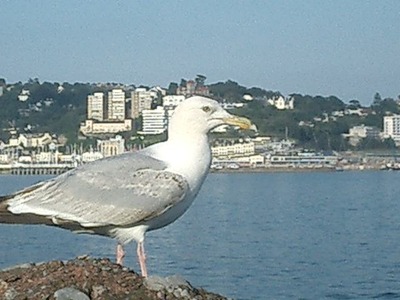 In the evening we were to a couple of bars, one called Woodys. It had a 50’s feel, well the bar staff dressed in what i guess was 50s style clothing. But upstairs was an exotic club – ew. I noticed every girl was wearing red, including me. Must be the new trend. At the end of the night we walked back in the moonlight with a doner kebab and chips, singing ‘I do like to be beside the seaside!’. The moon was reflecting off the sea, it looked so nice. Next day was our last day, and we jumped on a bus to Paignton, where old people were on the top deck! They would never climb the stairs in london! The shops were quaint, lots of teashops and ‘Singer’ shops, like a real village, but the seafront was very ‘English’. Wouldn’t recommend it, and it was freezing cos of the wind. We had brunch at a quaint coffee shop and it was like going back in time, very 80s. Then went to a bar, where there was ancient army veterans moaning about the world. Then realised it was the army’s old veteran’s day. Lots of old people. So then we sat at the park, and then went back to torquay. And that was the end of our lovely holiday.

On Sunday I went to a Filipino festival at Lampton park with Angie, and met Amy and Timmy. Marylou came with Dil, Ice and Jake, but they disappeared. And lou left her toy dog that Dil won for her!

Anyway I have never seen so may Filipino people before! There was a funfair and a stage where Filipino bands were attempting rock songs. It was quite amusing!