Why are little kids obsessed with chasing pigeons, it really is a mystery. I’ve been trying to capture a picture of the pigeons worshipping the pigeon king at Hayes. I will get a shot one day. I am still walking around in a daze, partly due to not being able to breathe through my nose for the past 3 days, very annoying, but mainly due to Saturday , my cousin’s wedding, the most amazing day – the day my family met the G-man and were happy. It was the most unexpected and pleasant surprise. And when I say my family, I mean everyone except my parents who couldn’t make it. So its even weirder that everyone has met him before them, but its cool cos it’s like I have their back-up now. It’s such a nice feeling, especially as we weren’t expecting anyone to be nice, but they came and introduced themselves, Its so strange I keep pinching myself to see if i’m dreaming. my aunt told me he’s handsome and my uncle was so happy that he looks like a cousin of his. One uncle shook his hand! WOW 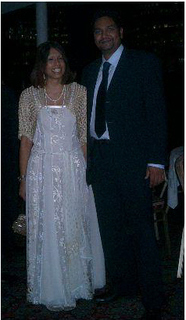 The wedding itself was the best I have been to. It was so strange seeing them say ‘I do’. Except the groom said ‘Yes’ in a rater nervous manner, causing a few sniggers. Mother of the bride was holding her little niece, who cried throughout the vows, but it didn’t matter because all the family were together, it felt just right. 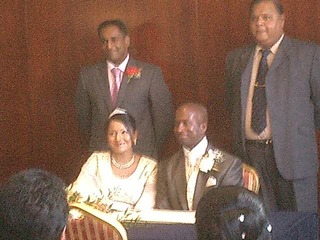 The reception was in a room looking over the river and Canary Whart, and as the sun set, it looked pretty cool. There was music which made a change from the usual noise of a Bengali wedding, and after dinner it turned into a disco. The groom’s side of the family danced, I was shocked, never seen old people in saris dance before! The evening went so quickly, months of preparation over in a flash! I don’t think I could do it. It was stressful enough just sorting mine and my sister’s outfits out. At least I got to wear an English wedding dress – I have always wanted to (total accident – Monsoon sale!)

5 responses to “A Rather Glam Wedding”