Jeeves is making a comeback – you know, the butler from Ask.co.uk. And I saw him today, giving away free lunch to the workers of Liverpool Street! 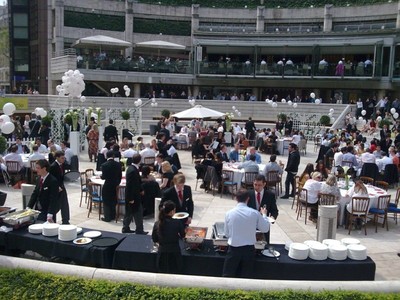 I decided I didn’t really fancy meat n mash for lunch, it was an amazingly sunny April day and I wanted to sit by the river. So I thought Cutty Sark! Except I forgot it was under a bubble tent while they fix it. Still I had a lovely M&S picnic by the Thames.

They were giving away free ice creams at the Ben & Jerries shop for charity, so I ventured over there, only to be chatted up by a 22-year-old boy. I didn’t really know what he was saying to me, these youngsters speak in some sort of code. Still it was nice to be mistaken for a young person, and he asked if I was on Facebook. Cos that’s how you do it these days, no giving out of phone numbers anymore. How things have changed. After I scared him off with my real age, I strolled along to Greenwich park with my Cheesecake Brownie cone and read my book in the sunshine. My book is called The Marriage Bureau for Rich People by Farahad Zama, and it’s keeping me entertained.

After a while, I thought I had better make my way back to the other side of London, or else I’d miss Hollyoaks. Had to stop off for a Starbucks frappocino on the way home though! Ah the life of a lady of leisure!

🎃 PUMPKIN PICKING AT COPAS 🎃
⭐️ GRUFFALO’S CHILD TRAIL at @kewgardens ⭐️
𝚊𝚍 - 𝚙𝚛 𝚙𝚛𝚘𝚍𝚞𝚌𝚝 🚂 CHUFFY TRAIN MODEL KIT by @timber_kits 🚂
Nothing much exciting happens in Slough, but when Stacey Solomon’s new range arrived in our Primark, I was there in a flash 😆
Spooky, spooky donuts 🍩 I just couldn’t resist getting the new @krispykremeuk Halloween donuts. We tried Vampire Bat and Creepy Cobweb, both sweeeeeeet 😋
Where can you go inside a LEGO® Underground Train for free? At the @LEGO store in Leicester Square! I totally forgot to share this from our visit in the summer holidays, but our recent tube adventure reminded me. It is absolutely amazing in this store!