Now let me explain. First of all the response from the British public this month has been amazing, wanting to do something to help the Syrian refugees, and just showing an immense amount of empathy. People have been so generous. But in some cases, well I think some people took this as an opportunity for a clearout and didn’t really think about what they were packing and who it was for! Some things just need to go straight in the bin – erhem dirty underwear…

Last Saturday I spent the most amazing day with a bunch of women sorting through clothes donations for Syrian refugees. This was all organised by Gossip Girls for Refugees, who had coordinated collections across Berkshire.

I wrote a post about why I’m helping here. And this day really showed that it’s not just about donating money or things, people can also help with their time and this is just as valuable. The amount of clothes to sort through was scary, there were 2 whole containers full, plus more full of food and toiletries. 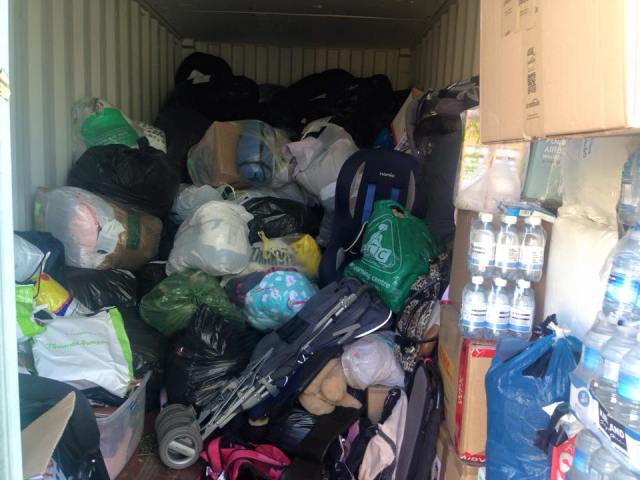 A 40 tonne lorry was to came on Thursday to pick up the boxed donations to take straight to Greece. There’s a video of the lorry on the Gossip Girls facebook page – it was HUGE! 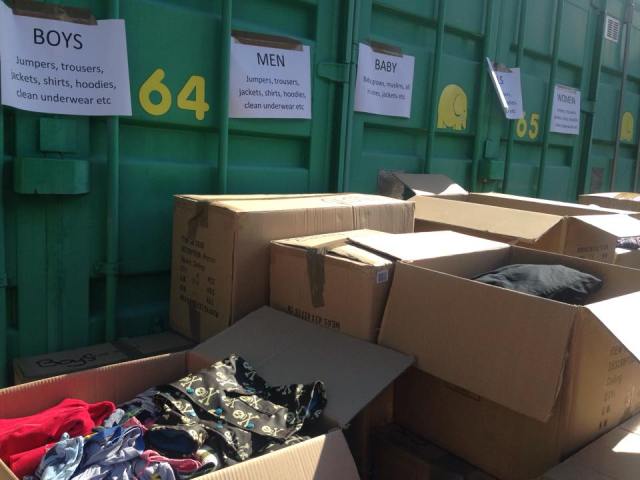 We had created a sorting station at the storage unit – Baby, Boys, Girls, Women, Men, Hats/Gloves/Scarves, Shoes and the idea was to go through the donations and put the suitable clothes into each box, and seal them when full. Winter is coming and they need warm clothing. We had a bag to put in the unsuitable clothes, such as shorts and strappy vests, and these would go to UK charity shops. Then there was the bag for binning – we put used underwear in here, and torn, dirty clothes that were beyond repair.

It was a huge job, but we got stuck in, each of us wearing disposable gloves of course! It was amazing, the camaraderie between us, we were all strangers, but really worked together as a team. Some bags were really good ones, some had freshly laundered clothes, brand new packs of underwear, proper warm cardis – you could sense the love in the packing of these donations. And other bags, well you get a gist from the list of silly items!

These clothes are for refugees who will be walking A LOT, and probably sleeping in the clothes they are wearing. They need warm jumpers and cardigans for the cold nights they are not accustomed too, sturdy shoes for their long journeys by foot. One lady who was sorting the children’s shoes and boots stopped for a minute. She felt so sad packing them, know they were going to little children who would be walking for miles, not knowing where home was. It’s such a sad situation, but we tried not to think about it and keep on packing. Still, the unsuitable donations did make us giggle. Especially the train driver who had donated his First Great Western jacket and we found condoms in the pockets. Yes really!

We worked from 10am – 6pm, and there was still loads to do. They would carry on the next day, but I couldn’t, I was absolutely shattered. So not used to manual work – oh my back! I am glad I helped that day, and knowing how many women wanted to help was great. Girl power! Well that is the name of the group – Gossip Girls! I took the unwanted clock home as a memento – I will never forget this day. And I definitely want to volunteer for more charity events in the future – one thing I did learnt is that charities do need people donating their time as well. Here’s a photo of me with my fellow volunteers.

I have to tell you also that the Gossip Girls are not charity workers, they are ordinary mums with full-time jobs. And they decided to do all this as well. It truly is an amazing achievement.
Well done Gossip Girls – you are amazing!

Join 3,353 other followers
Follow The Mummy Stylist on WordPress.com

Happy Monday! I love this photo from this weekend at @chobhamadventurefarm (ad -pr) - they are lots of cute corners for photos in their reindeer lodge. Lily loved wearing her Santa dress that I got from @sainsburys the other week. It comes with the cute headband 🥰 And Tyler’s wearing his new Christmas jumper from good old @primark.kids.
ad | We had the best Christmas Adventure at @chobhamadventurefarm - such a fun day out!
# ad | Introducing the BRAND NEW 𝗠𝗮𝗴𝗶𝗰 𝗠𝗶𝘅𝗹𝗶𝗻𝗴𝘀 𝗧𝗮𝗽 & 𝗥𝗲𝘃𝗲𝗮𝗹 𝗖𝗮𝘂𝗹𝗱𝗿𝗼𝗻 from @supermoosetoys! Following on from our post earlier in the week, this reel features Lily demonstrating how you can create two Mixlings with the Tap & Reveal Cauldron 💕
ad | Christmas Illuminated Garden Adventure at @westgreenhouse 💕
Happy 1st of December 🎄
ad | Last night we saw this year’s panto Sleeping Beauty at @theatrewindsor at their press night, and oh my goodness it was such a fun evening! We laughed soooo much. It was the first time my kids had been to a panto, and they laughed all the way through, especially Tyler - he was cracking up! ➡️ Scroll to see show photos ➡️