The first two weeks with a newborn, I was expecting it to be really hard, sleepless nights and constant feeding. I was nervous about Tyler being jealous, especially if I had Honey Nut attached to me all the time. The reality was not that bad after all, well in the first week anyway – and I had so much fun putting Honey Nut in all her outfits after months of waiting for her! 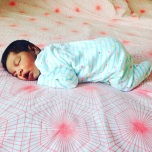 The first week, Honey Nut was a dream, she literally fed and slept and needed her nappy changed. This is how I’ve set up her cot, with a pillow on top of the mattress so it’s soft, which she sleeps well in. I swaddle her in her Bambini and Me swaddle blanket which is sooooo soft and light, I totally recommend it:

We had one bad day with bad wind and diarrhea (when I took a Senna tablet that I shouldn’t have as I was breastfeeding – oops), but apart from that she was great, and at nights after the last feed around 11pm/midnight, she only woke for a feed at 3am/4am and then 6.30am/7am. I had seriously bad ‘period pains’ whenever she fed, which was my womb shrinking back to size, and this lasted until Day 3. Ouch! Day 3 is also when I had to put cabbage leaves in my bra as my milk had come it. Luckily I was fine the next day, not so painful. And Day 3 is when we got baby’s birth certificate thanks to a random slot being available at the council, and the midwife came over – all was good with Honey Nut and my tummy. On Day 6 we went to the clinic where she had the heel prick test done and was weighed. She had gone down 1 oz from her birth weight of 7lb 7oz, which is normal. On Day 11, another midwife came over and weighed her and she had gone up to 7lb 13oz – hurrah!

Tyler understood about breastfeeding from day 1 which really surprised me. When she’d cry, he would say to me, “Go on mummy, Honey Nut needs a pint of milk!” – so he was telling me to feed her!! I can only assume he’s noticed mums at playgroup feeding their babies. So that was a relief not to have to explain about breastfeeding!

I was very aware of any warning bells for postnatal depression, and on the second night, Tyler went to my parents to stay over as he had preschool there. I could not stop crying when he left! It was uncontrollable but I know it was hormones and it’s normal for mums to miss their firstborn after the second baby is here. The next day I was fine and it was good for my husband and I to have time to bond with Honey Nut without feeling guilty about Tyler.

The other feeling I recognised from my PND days was when my husband slept next to me on the second night, and he could not hear Honey Nut crying, so I woke up alone to feed her and change her nappy in the night. I’m not having a go at him, he literally is a deep sleeper, but I recognised the feeling of being unhappy seeing him sleeping while I dealt with her. Plus he sleeps on top of the duvet and I like to sleep under it, which is really annoying! So the next day when Tyler was back, my husband went back to sleeping in Tyler’s room and I had Tyler sleep next to me. It’s a bit unconventional, but I keeps my feelings happy at night, as when I wake to feed Honey Nut and see Tyler sleeping, I just feel all the love for my children. So that’s how we’re sleeping for now. Tyler is a deep sleeper too so Honey Nut doesn’t wake him up.

Tyler is totally obsessed with Honey Nut, she comes above trains and that is saying something. When my husband went to pick him up from my mums and bring him back by train, he said NO! But when my husband said he’s going to see Honey Nut, Tyler was suddenly really keen to come home – now that is saying something! And Honey Nut loves Tyler, like from Day 1! She turns to his voice and smiles towards him, it really is amazing.

She’s lying in her little Poddle Pod here, she’s so calm when we put her in it and loves to look at the sky from there. Really cute to watch. You have to watch my vlog at the end of this post, seeing her look at the sky is just heart-melting!

It also came in handy when we had visitors round, so they could all gaze at her in it.

I’m really proud of myself for getting out and about early with Honey Nut. With Tyler I did not leave the house for 12 days, which was not good for my mental health! This time round, we went out on Day 5 to go to Tyler’s Little Kickers class. It was the first time I drove with 2 children! My husband was with me too, and you know what, it was the best feeling. I did it! I videoed our first outing for the vlog too (end of this post).

We went to Harris + Hoole like usual, and it felt good. She didn’t wake, so we did a little food shop, but then suddenly she was crying hungry! So my husband went to pay and I rushed back to H+H with Tyler and Honey Nut. Unfortunately our usual sofa was taken which made Tyler have a hissy fit and hide by the lifts. I put the pushchair in the corner and ran and grabbed him, dragging him to the corner “But I want to sit on the sofa!” I had to feed Honey Nut, and Tyler just hid under the table. It was a bit stressful, but hey, I did it! Honey Nut was fed and finally my husband was back from paying so we could head home, phew.

I did another shopping trip on Day 10, with 3 feeds in public! My discreet outfits have made me more confident to do this – basically leggings, and a vest and nursing bra underneath a long baggy t-shirt. So you pull the vest down and the top up so everything’s covered really.

That week we received a new car seat for Tyler now he’s ready for Stage 2 – it’s the Diono Radian 5 which he loves! I will be doing a proper review, but for now I can say it really makes life easier with 2 children in the back of the car. Also having a Toyota Yaris rather than my cramped Mini has made my life sooooooo much easier, I can’t believe I made us suffer all these years. We set up the new car seat when Honey Nut was sleeping on Day 9 – thank goodness she had a long sleep then! Tyler loves the purple colour and that it’s so soft. Getting into it is easier than his previous Maxi Cosi car seat and this means I can get Honey Nut in quicker too. Here’s both of them in the back:

In the second week, things got a bit difficult from day 12, with Honey Nut crying constantly in the afternoons due to trapped wind. And she cries LOUD! Sat – Mon was looong, I was constantly feeding her. But she still slept well at night thank god. She has tongue thrush which is why she takes little feeds, but I picked up some medicine for it from the GP, it still hasn’t cleared up as I write this (Day 17), but it takes 7 days apparently. Today I may have figured out why she is having wind problems – I’ve been swapping boobs when feeding her so she’s just been getting fore milk. So today I’ve been feeding from one boob at a time so she gets the hind milk which is more fatty and easy to digest and I presume more filling. So she’s been sleeping really well now since 2pm (it’s now 4.20pm -yes!) – I’m hoping this has solved the issue – fingers crossed! 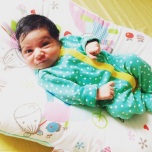 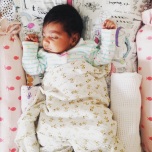 Here’s my vlog of our first two weeks with Honey Nut – get ready for some baby spam 😛
Enjoy!