I just wanted to write down how I’m feeling and all these crazy thoughts going through my head as my firstborn starts school tomorrow. I was fine the whole of summer and even this past week, keeping busy with last days of fun with Tyler and Honey Nut.

Then as we had our last outing to the miniature railway yesterday and there was nothing left to do but get ready for his first day, suddenly I had all these feelings of anxiety and nervousness and feel sick, as if I was the one starting school. You know that feeling on the night before you start a new job, or that feeling when you do start a new school year. Just bleurgh. 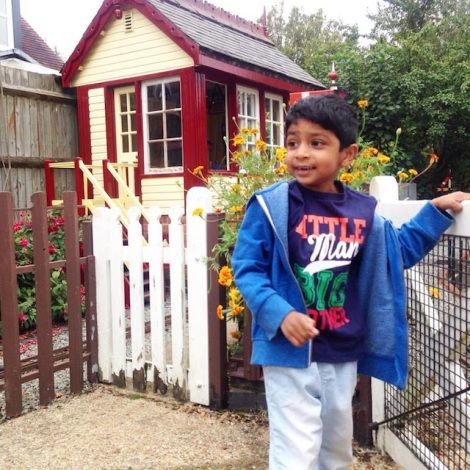 I had thoughts like, what if he holds his pee in all day and doesn’t go to the loo and then wets himself?? Will he get hungry between breakfast and lunch. Will he cry? Will he cry midweek when he realises this isn’t a one-off, it’s everyday! Will he eat his lunch? What if he can’t open his crisp packet? How is he going to cope having to learn about things other than trains?! At the end of the week, will he be a different boy than the boy he is now? Will he suddenly be all grown-up and moody?

Then I had thoughts about me, will I make mum friends or will I be one of those loner mums that doesn’t talk to anyone and rushes off without making eye contact with anyone?! Gah! I hate overthinking stuff, but I couldn’t get to sleep for ages with these thoughts whirring through my head.

Now that I’ve written them down, they are rather stupid thoughts, I’m sure he will be fine. And tomorrow when we go in, I’ll show him where the loos are before I leave him there.

Randomly at 2.30am this morning, Honey Nut started stirring and making sucking noises in her cot. I turned to put her dummy in her mouth, and at that exact moment Tyler put his arm around my back saying “I want a cuddle mummy. I don’t want to ‘something something'” He sounded so upset in his sleep but I couldn’t work out what he said. Was it “I don’t want to go to big school”? Earlier this week he was saying he wanted to go to the little school (ie his preschool) and not the big school. He’s been watching the video I took of his last day at preschool the whole summer. It’s so sad!

This morning we made Tyler try on his full uniform. He threw the worst tantrum, “I DONT WANT TO WEAR IT WAHHH!!!!” I was like, oh my god, is it going to be like this everyday. Then my husband took him and sat him on his lap, asking him if he was scared about starting school, was he going to miss his friend R, is that why he was upset? He didn’t answer him, but he calmed down after this one-way chat and suddenly liked wearing his uniform. “I look so beautiful!” he said haha. So maybe he was scared, maybe that is why he wanted a cuddle at 2.30am. But my husband said to him that there’ll be lots of other children like him to play with, it will be fun.

And now we are home just chilling out, as we’re as prepared as can be now for tomorrow. The uniform all fits, I adjusted the elastic on the trousers, everything is labelled, the shoes fit perfectly. So yeah, I just wanted to write this down as there’ll never again be a first day at primary school, as with Honey Nut I’ll be a school mum pro by then – hopefully! My mum remembers not knowing how to do my tie up on my first day at school, and she says I cried on the third day (so I must have realised then that school wasn’t a one-off!).

Is your little one starting school this year, or if you’re a school mum pro, do you remember what you were thinking the day before the first day?

20 responses to “The day before Tyler starts school”

Pink season is not over, not on my feed anyway 😝 This tree behind us is a crabapple tree (I think that’s what it’s called), and it should be in full bloom next week. Yep, more pink photos to come! 🌸
🏖 CHOBHAM ADVENTURE FARM 🏖
🥰 Outdoor meet-ups with friends - blankets are a must, brrr! 🥶
𝘢𝘥 - 𝘱𝘳 𝘱𝘳𝘰𝘥𝘶𝘤𝘵
𝘢𝘥 - 𝘱𝘳 𝘱𝘳𝘰𝘥𝘶𝘤𝘵
When the London Bus Museum brought the museum to us 👏 Today for one day only, heritage buses were running #Route65 from Ealing to Leatherhead, and my boy and I decided last minute to go and see them! We even managed to have a free ride on one, sitting on the top deck. We rode from Ealing, across the river and hopped off at Richmond. The views were amazing and it was so nice to ride a vintage bus.