I am soooooo late writing this that she is almost 8 months now – oops! I’ll start off with some pictures from month 6 to 7: 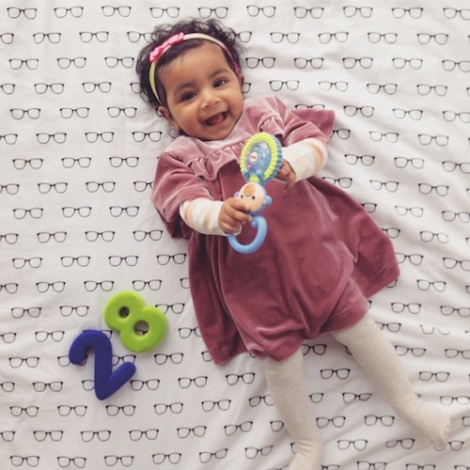 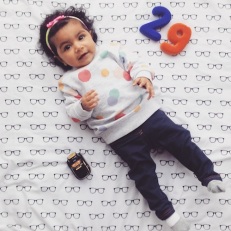 Luckily when she actually turned 7 months on 27th January, I wrote an Instagram update about what she likes:

She is loving Peppa Pig (yes really, she turns to the theme tune and is mesmerised!)
She is trying to crawl
She can stretch all around to pick up things
She gets so over-excited when Tyler is back from school and when Dada is back from work – she clenches her fists and goes ‘errrrrr!’ like she can’t contain herself!
She has no teeth yet but is drooling and chewing anything she gets her hands on.
She LOVES food and feeding herself finger food like broccoli, biscuits, scotch pancakes, waffles.
She dives for our plates when we are eating.
She likes slurping water from her little beaker and dribbling it out of her mouth for fun.
She likes playing with Tyler’s trains, cars and duplo lego.
She’s ticklish under her feet.
Still not sleeping the night but no longer having nightfeeds.

Mummy leaving her! And that’s just going into another room.
Having her hair washed in the bath
Having her nose wiped
When Daddy bottle feeds her 😛
Being overtired

Weight/Size – Still haven’t got her weighed but I can see she is healthy. She is in size 6-9 month clothes and some 9-12 month leggings (I have put away her 3-6 month clothes – wah!) Nappies are Size 3.

Food – I moved her to a routine roughly following Gina Ford, in order to cut out nightfeeds. It took a couple of nights, and now she doesn’t want feeding in the night (woohoo!). So roughly, her feeding routine is:

7am: 5oz milk and sometimes a bit of toast or scotch pancake or waffle
9.15am: a bit of baby porridge (after we’re back from school run)
11.30am: lunch (baby purees -usually sweet potato and red pepper, or brocolli and potato) with finger food (organix baby snacks) followed by a Petit Filous (the new purple baby one) and water sipped from a beaker
2.30pm: 6oz milk
5pm: dinner and water (same as lunch, but her finger food is usually Tyler’s dinner, ie pizza fingers, brocolli, green beans)
7pm: 6oz milk

Now I adapt the routine if she falls asleep after Rhymetime around 11.30-12pm, then I will dreamfeed her the milk when we get back home, and then give her lunch when she wakes around 1.30-2pm

Sleep – She falls asleep around 7 to 8pm while I feed her. I am trying to get her to fall asleep in the cot without being fed, so she gets used to self-soothing herself to sleep, but she keeps falling asleep with her last feed. This is a problem through the night, as although she is not waking for a feed, she needs water and a cuddle to get back to sleep. She wakes for the day around 6.30am – 7am, and has a nap 8.45am – 9.15am, and a lunchtime nap around 12 – 2pm, sometimes it’s earlier if we are at Rhymetime and sometimes the nap is shorter. If she has a shorter nap, then she usually falls asleep again when we pick up Tyler around 3pm.

Development – She has been so close to crawling for weeks, but still at the stage where she is stuck on her front and stretches to reach things. She says ‘Huh?’ to get anyone’s attention, it’s like its her way of saying ‘Hi’ She is babbling mum mum mum a lot. She hasn’t rolled over yet, but twists to the side a lot.

What we have done

Mainly baby groups (Rhymetime at the Curve, and the Salvation Army group). I’ve been giving the Windsor Storytime a miss as it’s been so cold and Lily has had a permanent cold, so I’d rather she stays warm and we do local things. Other than that, we have been going to see the grandparents too.

Well, since I stopped breastfeeding, I feel free! It was a hard decision to make, I was so pleased to have got to 6 months, but with all the nightfeeds (and there was a LOT!), I was beginning to feel she was waking for comfort rather than actually needing to be fed, so I wanted to cut this habit now. It was emotional and I felt deeply sad, especially when I was leaking the last milk I had produced. It took a couple of weeks for the milk to dry up, and the first 2 days were PAINFUL, I had to stick cabbage leaves in my bra again! Anyhoo, it was so liberating to get rid of all my baggy night-shirts and just have normal pyjamas in my drawers. It triggered that huge declutter that I did.

So I am fine, some days are hard as she can really cry. I am hoping it is because of teething and that one day, she will be less hard work! But then when she is happy, she melts my heart with how she looks at me! There’s more happiness than unhappiness, but you know what it’s like, you only remember the hard bits. Here’s hoping some teeth will have appeared by the time I write the next update!