The last of the baby updates! I have been quite terrible at writing these, putting it off as she seems to be picking up so much that it’s hard to keep track. But I am writing these for myself to look back at, so I am making myself write it today!

Exactly the same as at 10 months – with the new found love for Little Baby Bum bus videos. She has started to like bath time again, after I have got in with her so she is less nervous of the water. 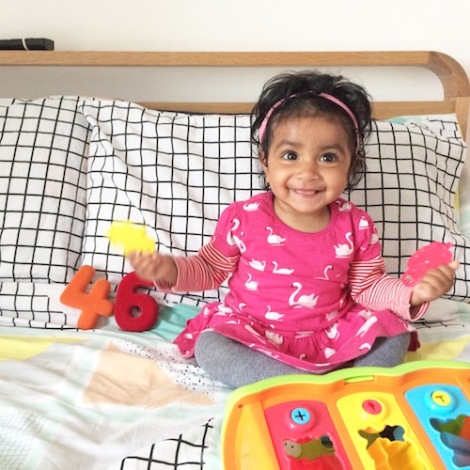 Weight/Size – Just before 12 months Lily weighed 19lbs and was 29 inches tall. She is in 9-12 month clothes, and moving on to Size 4 nappies.

Eating all grown-up food, trying to feed herself with a fork. She prefers the beaker to her bottle for water, but as she makes such as mess I still give it in a bottle. She was on 3 bottles of formula – morning, afternoon and bedtime, and I switched to cows milk the day after her birthday. She definitely prefers it to formula! 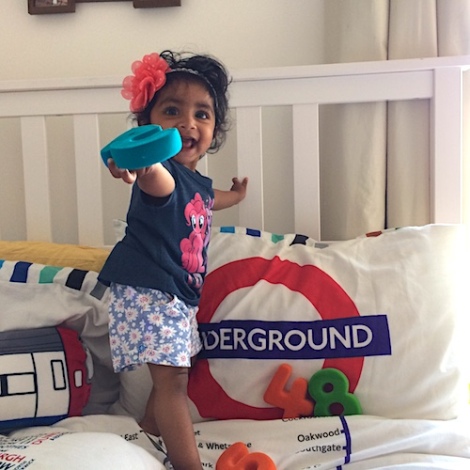 We seem to have moved to one long nap in the day, sometimes in the morning, sometimes after lunch. It varies. But then sometimes she has a short morning nap on the way back from dropping Tyler, then she’ll be awake all day and have a second nap in the buggy when we go to pick up Tyler.

At night she seems to be going to bed later, 8 – 9ish, and she wakes two or three times crying to be settled with the dummy or a sip of water, or with teething gel. It’s usually early in the morning, 4.30, 5am ish. Then she wakes for the day 6.45am. It’s quite draining. I long for a full nights sleep! Oh well. 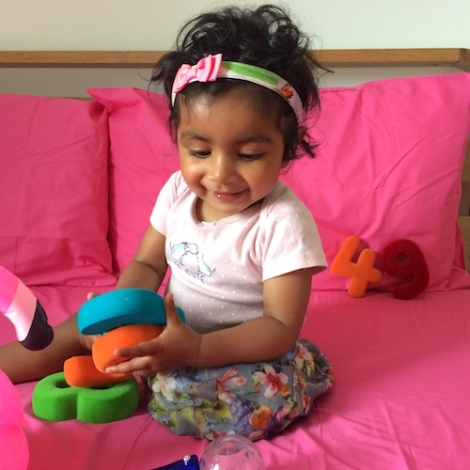 Right, this is all from my Instagram updates, as I can’t keep track otherwise!

45 weeks: She’s had quite a few development leaps from saying Tyler (ty-ya), waving and shouting ‘da da’ in a growly voice when she sees him, cruising along the sofa and beds, climbing up chairs and reaching up to pull things out of the top rack of the changing table 🙉 Still no teeth though!

46 weeks: Started throwing herself on her front on the rug.

47 weeks: Started to stand for a whole minute as of TODAY! Exciting!!! She is so pleased with herself.

48 weeks (11 months):  FIRST TWO TEETH CAME OUT! (The bottom two) Standing any moment she can, trying to walk, bouncing on the bed, climbing up stairs, walking with the baby walker, babbling that actually sounds like words, cheeky personality, pulling Tyler’s hair and throwing tantrums on the floor when she’s angry (all the time!) and laughing when we are laughing – a big hearty laugh. She has mastered standing up from the ground on her own and then clapping as she stands.

49 weeks: Lying down on the rug to watch TV. Babbling to herself in the mirror – I think she thinks her reflection is another baby. Starting to play away from me at toddler groups.

50 weeks: Took her first three steps! But then that was it for the week. Climbing up and standing on the trampoline at toddler groups.

51 weeks: Screams till she gets what she wants – usually your hands so she can walk around, or for food she sees, or water, or milk, or rich tea biscuits, or Pom bear crisps…
3 days before her birthday, on 24th June, Lily started walking and has not stop walking since.

52 weeks: She is ONE! We’ve made it to a year. 52 weeks since this one was born on that crazy Monday. I remember it like yesterday yet it also feels like years ago! So much has happened in those 52 weeks, and best of all is this little girl that’s grown up and learning new things everyday.

Also her two fang teeth came out the night of her birthday. No front teeth, just the fangs!

What we have done:

Loads – mummy and kids train trip to Southend (I was well proud of myself!) and to Stratford to the Olympic Park, visiting Aunty’s flat and the cable car, family trip to Ruislip Lido, 81 bus adventure to Hounslow.

I do feel happy, enjoying seeing this little baby girl turn into an adventurous toddler. I can see so much of my sister in here, no fear! Some evenings are hard, as she fights sleep. She would choose to stay awake all night if she could. So she gets overtired and really cries, and those times are hard, as are the wakings at night. But I feel lucky to be able to get help at the weekends from my family, so I’m not complaining. Most of the time, she is such a joy. She shows me so much love, feeding me food all the time, she loves to share with me. The look of love on her face when she shares with me or when I’m playing or singing to her – nothing can beat that.

Mint or pink, which one?! @bicestervillage is made for Instagram (as well as designer shopping obvs 😝) Omg when I visited there the other week with my sister, there were so many floral displays. The prettiest shopping centre I’ve seen recently.
🎂🎈HAPPY 9TH BIRTHDAY 🎈🎂 to our sweet boy Tyler. He’s had a lovely Pokemon-themed family birthday. Presents and cake and lots of birthday wishes. It’s been a great day. I can’t believe I have a 9-year-old child!! Totally feel blessed though ☺️
This is the “let mummy take a photo of you on your last day as an 8-year-old” pose. My babies growing up, I swear they were just born!
𝘢𝘥 - 𝘱𝘳 𝘱𝘳𝘰𝘥𝘶𝘤𝘵
My first wisteria hysteria photo with me in it, I’m so happy. You would not believe how busy it was at this moment.
🌸CAFE WITH A PLAYGROUND 🌸