“I reeeeeally want to see Windsor and Eton Riverside station” – that is what I have been hearing every day for the past month from our train enthusiast Tyler. I think it’s because he spotted it on one of those train maps he’s been studying. Anyhoo, we had nothing planned on Saturday so I thought, why not, let’s go on a train from this station. 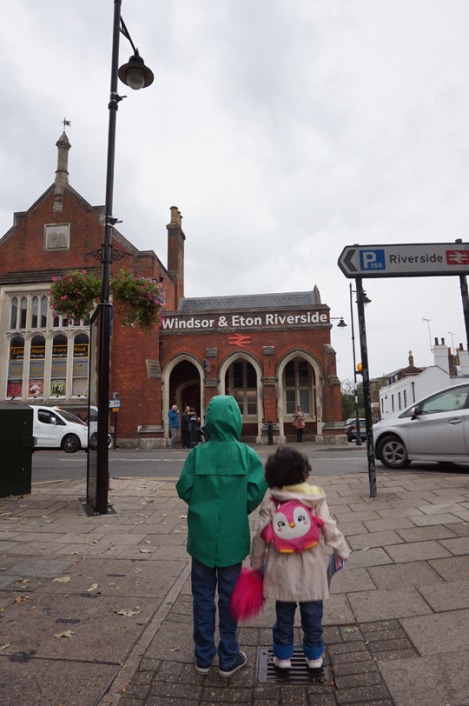 We caught our usual train from Slough to Winsdor and Eton Central and walked the 5/10 minutes to the other station, fighting through the crowds of tourists – Windsor on a Saturday is a no no! It’s a nice looking station, lots of interesting arches, but the best thing happened when I went to take a photo of the kids by this train.

The train man told us to hop in and get a photo in the driver’s cab! Tyler’s dream came true, he was so so happy! Lily had a go too, and I think she actually wanted to drive the train, reaching over for the buttons.

A travelcard from Windsor & Eton Riverside including London Zones 1 – 6 cost me £17 and the journey was this route below. It is long, over an hour, but I passed the time making Instagram stories.

The kids looked out of the window for most of the journey, I brought biscuits for snacks, and Lily had her Poppy doll. Here is Tyler looking over the level crossing at Datchet. He likes level crossings.

Out of the window we saw Liquid Leisure at Sunnymeads, a Primark at Feltham, kids football classes at Twickenham, Underground trains at Richmond, and London houses and apartment blocks as we passed Wandsworth, Clapham and Vauxhall.

When we finally reach Waterloo, we sat at Yo Sushi, as you can see a good view of the trains from there, and we had Japanese fries.

And that was our train adventure. Well not quite, we also did the Waterloo and City line, but I couldn’t get good photos as it was really busy. We got the Met line to visit their Nana and Lily had a nap on the bus ride. I guess this travelling malarkey is tiring work!

Do you have a train journey that you’ve always wanted to do?

Photo taken by Tyler ❤️
𝙰𝙳 🍔 FLAMING COW - ETON, BERKSHIRE 🍔
Just had to pop a post on here to remember the day the Elizabeth Line Central London section opened! The Elizabeth Line is the reason we moved to Slough many years ago, so it actually felt super exciting to finally ride the Central London bit today.
🚌 Vintage Bus Days 🚌
🌺 Langley Country Park Rhododendrons - just OMG 🤩 This is me telling you to go now. Now now! It is a colourful floral land of magic at the moment. The colours seem never ending as you walk through Temple Gardens, it’s soooo beautiful!
It’s not everyday you get invited to an awards show, and then the company you’re representing goes and wins!! 🤩