Yesterday my boy and I had an arts and crafts day. It was grey and windy outside, and I quite fancied having a lazy day indoors. But this did mean keeping the boy occupied. That’s when the brainwave of painting came to mind, and I also joined in. This is what i created, a funky photo frame. I’ll show you how I did it in this post. As for the boy, he painted a car.

I bought this kit for my husband on Father’s Day as an activity to do with his son – a ‘Paint Your Own Vehicle’ kit.  Without any sign of it being done for 3 weeks now, I thought why not just let the boy paint it now!

He was so so excited. We lay out newpaper on the floor. I couldn’t find the little brush that came with the kit, so we used a big brush instead. Tyler got stuck in.

He was surprising tidy about it, and let me wash the brush between colours, and if he got any paint on his hands, I had to wipe it with a baby wipe – he’s a bit OCD about getting stuff on his hands!

You can see the finished car at the end of this post. This put me in the painting mood too, so I painted a photo frame that I had been meaning to do for ages. I had bought this M&S frame for £1 in a charity shop.

My idea was to make it more contemporary, by painting it light grey and painting the inside edges in pops of colour. I would get rid of the gold inside borders (yuck) and paint the text ‘family’ on the top curvy bit. Here’s how I did it – first I mixed a grey colour from white emulsion paint with a drop of black mixed in. I painted the whole frame in this colour. Ideally I would have used a mini-roller, but I only had Tyler’s paintbrush to hand. So I painted the strokes in the same direction to make it look neat. 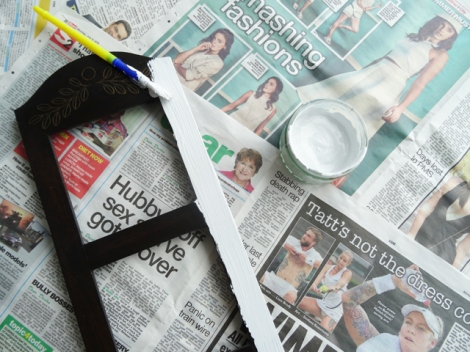 Once the grey had dried, I painted the inside edges in green, yellow and pink – using mini-emulsion tester paint pots that I had in storage. The paints are 2 years old and still usable, so I definitely recommend them (they’re from Wilkos, 99p each). I have loads of colours stored in a shoebox, really handy.

Next, I wanted ‘family’ written at the top in a trendy watercolour type font. I tested a few out on my laptop and settled on the font ‘The Lost Paintings’

Then I roughly copied this style on to the frame in pencil and then drew over it in a black Sharpie pen.

It’s thinner than I’d like, so I may go over it in black paint once I’ve bought a suitable thin paintbrush. Still, the whole thing is how I imagined, and here it is, together with Tyler’s masterpiece painted car! Now all we have to do it choose the photos to go in the frame. Mummy and Son Painting Day – pretty productive eh? 🙂