Yes, fairies are real! I always believed in them since as long as I can remember. And then I got my dream part in the school play when I was 7 and got to play Tinkerbell. Admittedly it was because I had a small voice and it was a non-speaking part. But who cares, I was a fairy 😀 Nowaways, I still get that magical feeling when I sit in my parents’ garden, with all the flowers and butterflies, the garden ornaments and the solar lights everywhere – it really comes to life at night. It’s the perfect place to make a fairy garden.

I was contacted last month by Ocean Finance who asked me to take part in the Fairy Homes Challenge. I was like, that is such a cool idea – a fairy garden! They gave me £40 to buy my supplies and get creative. Now to get maximum out of the budget, I decided to use what my parents already had in their garden, seriously they have soooo many pots and plants and pebbles, they wouldn’t notice if I took anything, right?! That meant I could spend the £40 on just fairy furniture. Here’s what I got:

£10 went on 2 giant mushrooms made out of tree trunks and sticks, which I bought from a stall at the Slough Canal Festival. £30 went on all the cute furniture – a bench, a lamppost, a bridge, 2 planters and a metal fence. They were seriously SO CUTE! I got them from Fairy Gardens UK.

I found the perfect pot in my parents’ garden – a large terracotta one with an avocado plant in it – perfect to create some shade for the fairies!

The first thing I did was clear up the dead leaves and tidy it up a bit, so it looked like this. I have no idea whether those plants around the edges were weeds or not, but they looked really fairy-like with their little leaves.

Next I placed my furniture where they would roughly go, so I could work out where I needed to place extra plants and pebbles.

With this in mind I decided to place white pebbles and wooden bark under the bridge and bench. I rummaged around in the garden for a bushy plant that I could put behind the fence, so it would look like a forest. In the two planters, I needed some sort of tiny plant. Then my mum had a brainwave, and snipped of the edge of two branches from an old artificial Christmas tree. I put some soil in the pots to hold them in.

I wanted it to look like there was a river under the bridge, so I painted some of the pebbles blue. 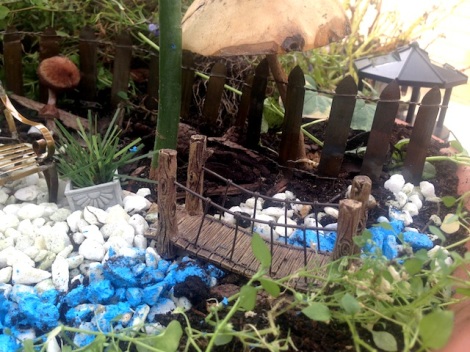 Here’s my favourite piece of fairy furniture – the lamppost! I just love it, gives it an real olde England style. 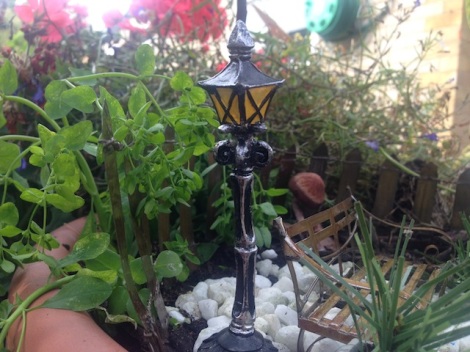 I found two real mushrooms growing in a pot behind my dad’s shed, so I transplanted them in behind the bench. And the last thing to add in were the giant mushrooms, which Tyler helped me put in.

Here is how it looks from above, so you can see where I placed everything.

And just so you get to see how my mum has already made this a fairy-friendly area, here’s the whole area. 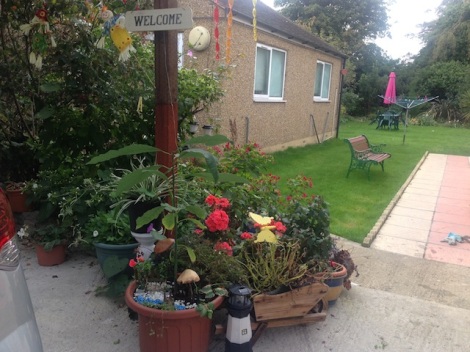 And there you have it, how I made a fairy garden. I tell you what, this was the most therapeutic morning I had ever had! I really recommend making one, especially if you’ve had a stressful week, it will calm you down.

Tyler and I couldn’t stop looking at the little garden afterwards, it’s so so cute! Now let’s hope the fairies come visit it 🙂

The Fairy Homes Challenge forms part of the “Dream Homes” series, brought to you by the homeowner loans team at Ocean Finance.

40 responses to “How to make a Fairy Garden”

𝘢𝘥 - 𝘱𝘳 𝘱𝘳𝘰𝘥𝘶𝘤𝘵
📚 W O R L D B O O K D A Y 📚
𝘢𝘥 - 𝘱𝘳 𝘱𝘳𝘰𝘥𝘶𝘤𝘵
🍎 HUNGRY CATERPILLAR CUPCAKES 🍎
Happy 1st of March! I have my first book review post of the year as I finished my first library book stash since the pandemic started. And I loved all off them, but the first one especially.
Tomorrow starts the last week of school at home, maybe EVER! (I mean, I don’t want to jinx it, but I feel like this is it). Even though I am sure everyone is sick of it, it has been nice knowing what the kids are learning at school and being so involved.