Last weekend we went to the Slough Canal Festival, which is held every September at Bloom Park in Langley, by the Slough arm of the Grand Union Canal. This is the first time we have gone, as last year we were on holiday. I had only heard good things about it, and that if we visited on the Sunday, we would get to meet the Dulux dog! (The festival is sponsored by AzkoNobel whose Head Office is based in Slough)

Now on checking the weather forecast, it was due to rain on the Sunday, so my boy and I went on the Saturday, which was a beautiful sunny day. Then it didn’t rain on Sunday after all, so we went again, this time with my husband and my siblings.

When we arrived, we were greeted by boys directing us where to park my car. The area was surrounded by bunting, and lots of stalls and tents – there was a real community fete atmosphere in the air. Tyler went straight to the animals – there were rabbits, sheep, ducks, cockerels, hens, goats, guinea pigs, tortoises and ponies there! 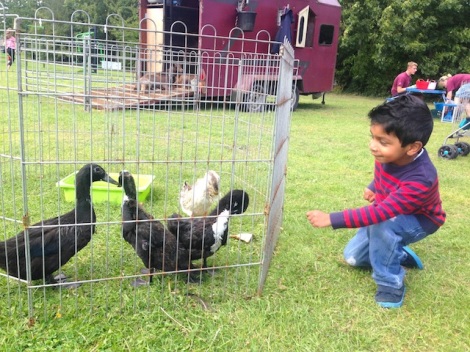 How cute are these little guinea pigs huddled under the umbrella! 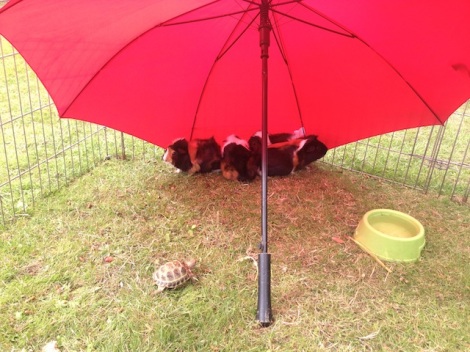 There was a huge marquee full of stalls selling craft items, bric-a-brac and toys. Back outside, we wandered over to the bouncy castle and slide where Tyler played for a while, in exchange for £1.

He then wandered over to ‘Ken & Brenda’s traditional toys’ stall – it was the cutest table full of traditional wooden toys. Tyler was transfixed by this wooden marble game, both on the Saturday and the Sunday – we spent a lot of time here! 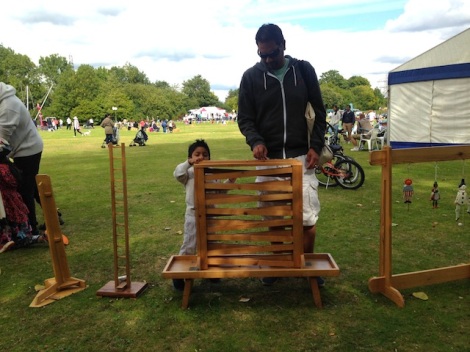 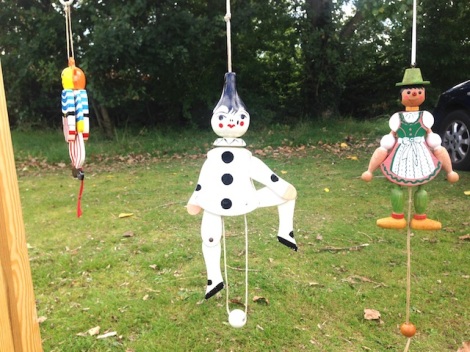 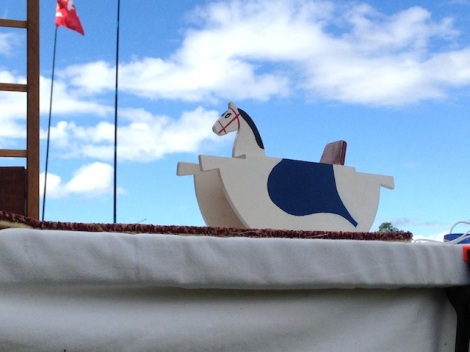 On the Saturday there was a Scouts stall selling all sorts of bric-a-brac and vintage bits and bobs. Tyler with his beady eyes spotted the toy cars straight away. He spent so long here looking at each car in detail. In the end we bought 2 cars for 50p – one was a 1970s Tomika lorry, and the other a 1990s Mattel plane. 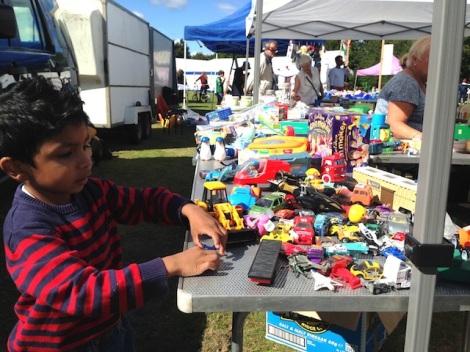 We then sat on a haystack watching steam engines go around the field. They were offering free rides, but Tyler just wanted to sit and watch. 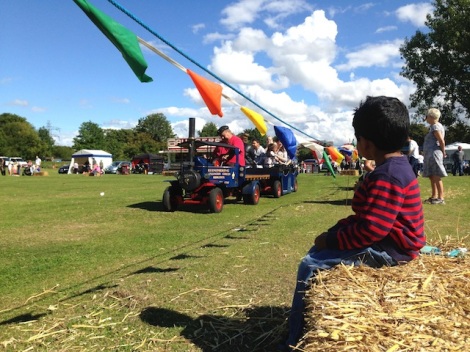 Behind the haystack was a play area too, which was quite handy. 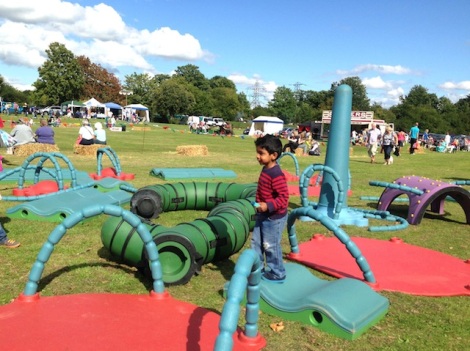 After another hour, we decided to call it a day on the Saturday, passing the ferret racing and then walking by the canal on the way back to my car. This boat is the official canal trust boat, as they were present that day, promoting the canal. There were also canal rides available. 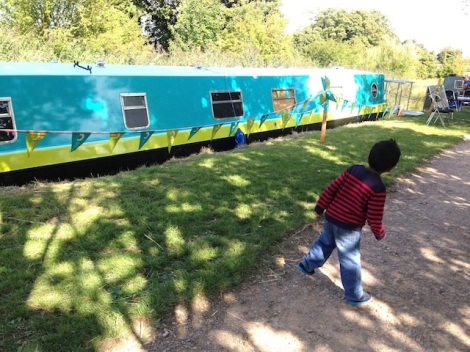 The next day we returned, and this time the birds of prey were present. They always spook me out, sitting there so still. 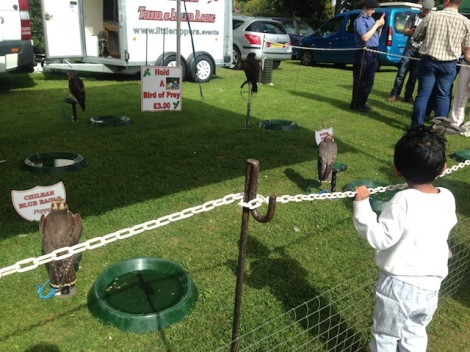 There was also a dog event in the centre, where dogs were racing a plastic bag – it was quite funny. And we finally met the Dulux dog! 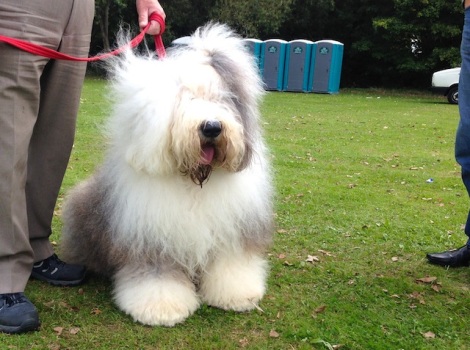 We also did a bit of arts and crafts in the ‘Emma’s Crafty Kids’ tent. 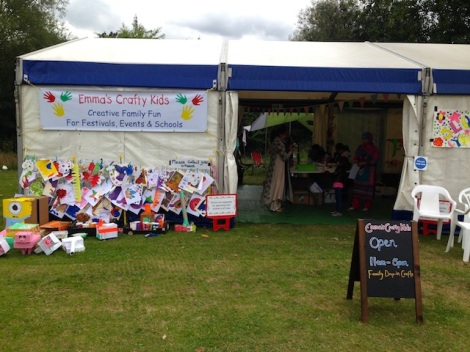 There were tables with marker pens and glue and a badge making set – it was really fun. Tyler’s aunty had the best time in here! 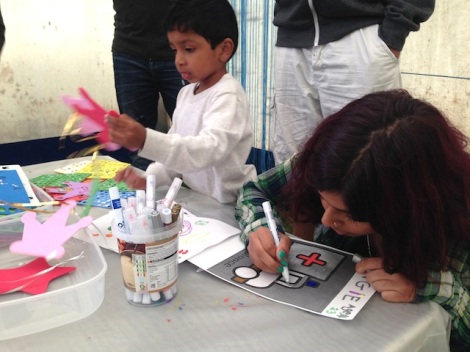 Tyler had another peek at the steam engines before we headed back, as the skies has gone grey – boo! 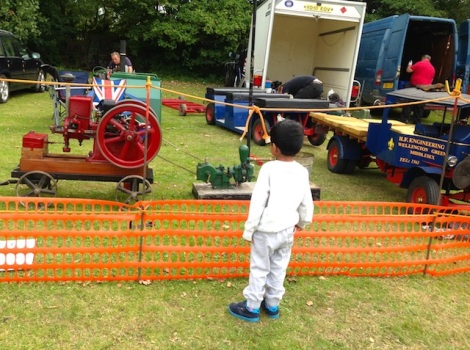 And I had to take a photo of this van that was serving teas and coffees – so cute! 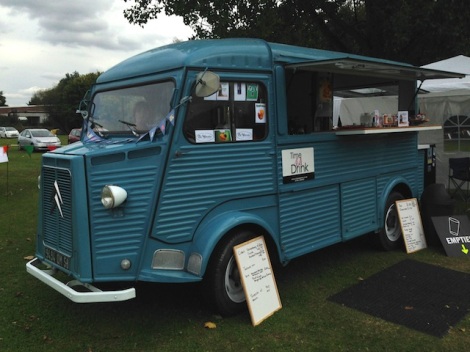 All in all, it was a really enjoyable weekend, and the best part about it being local was that we were home in 5 minutes! I love local events, there’s just such a lovely atmosphere and you don’t get the awful crowds of London, just good old-fashioned family fun. If you missed it this year, keep an eye out for next year’s Slough Canal Festival! Or you can, of course, visit the park any time of year, and watch the canal boats go by.

For more posts about Slough, days out in the area, latest on town centre developments etc, click here.

🎃 PUMPKIN PICKING AT COPAS 🎃
⭐️ GRUFFALO’S CHILD TRAIL at @kewgardens ⭐️
𝚊𝚍 - 𝚙𝚛 𝚙𝚛𝚘𝚍𝚞𝚌𝚝 🚂 CHUFFY TRAIN MODEL KIT by @timber_kits 🚂
Nothing much exciting happens in Slough, but when Stacey Solomon’s new range arrived in our Primark, I was there in a flash 😆
Spooky, spooky donuts 🍩 I just couldn’t resist getting the new @krispykremeuk Halloween donuts. We tried Vampire Bat and Creepy Cobweb, both sweeeeeeet 😋
Where can you go inside a LEGO® Underground Train for free? At the @LEGO store in Leicester Square! I totally forgot to share this from our visit in the summer holidays, but our recent tube adventure reminded me. It is absolutely amazing in this store!