But Tyler wanted to go on ALL of them. I didn’t think it would be possible in one day, so I’d ask him to choose, tram OR cable car and DLR?

Well, seeing as it would probably be our last day out, just the two of us, for a very long time, I figured out a way to do ALL the different types of trains in ONE DAY! Interested how? Read on!

1) We got the 11.15 Great Western Railway train from Slough to Ealing Broadway. Blue train – tick.

2) At Ealing Broadway we got off at 11.35, with Tyler shouting out ‘THE CENTRAL LINE!!’ when he saw it. But I said to him, ahh but today we are going on the District line! He’d never been to that side of the station before and was very intrigued. It must be the older side, as they have lovely vintage ‘Ealing Broadway’ signs there. We got on one of the new District line trains to Earls Court.

3) We arrived at Earls Court at midday, and changed to get another District line train to Wimbledon.

4) We got to Wimbledon at 12.30 and went into the shopping centre next to the station for a loo break and to buy some sandwiches to eat on the tram.

5) We went back into Wimbledon station on to platform 10 to get on a tram. It was 1pm, and Tyler ran on to the tram, he was that excited! We got the tram to West Croydon, eating our lunch on that journey. The tram was really fast, faster than I expected, going on old train tracks through industrial parts, past an Ikea and then on to the streets of Croydon.

6) We got off the tram at West Croydon at 1.25 and walked around the corner to the Overground station. We took our time, taking pictures of trams on the way. 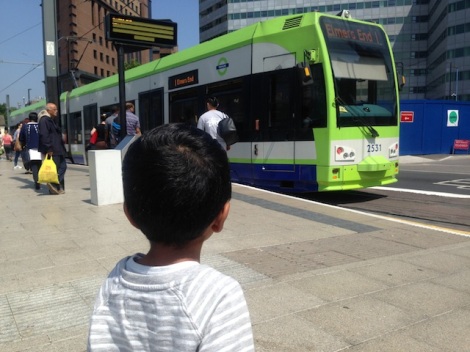 7) At West Croydon station, we got the 1.50 Overground train to Canada Water. Tyler had a little sleep on this journey and I had to wake him at Canada Water, where we had arrived at 2.20.

8) We then got a Jubilee line train from Canada Water to North Greenwich (only 2 stops), arriving at 2.30. 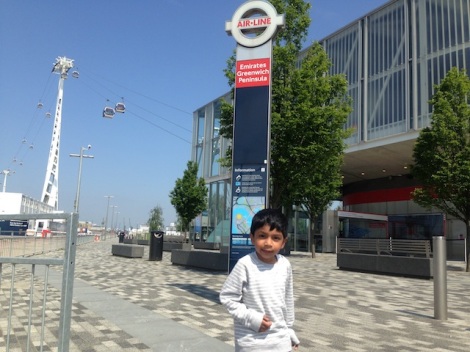 9) We went outside at North Greenwich, and this is where Tyler recognised it from the previous week and practically ran in the direction of the Emirates cable cars. It’s about a 5 minute walk from the underground station and you can swipe your Oyster card to get it, and it costs £3.50. We got on a cable car (all to ourselves!) at 2.45. This time I saw lots of business people using it, so people do actually use it for commuting!

10) The cable car journey is about 10 minutes across the Thames and we got off it at 2.57, before walking around the corner to Royal Victoria on the DLR. “Driverless trains!” exclaimed an excited Tyler 🙂

11) We got on the DLR train at 3.05 to Poplar and then changed there to go to Canary Wharf, where we got on another DLR train to Heron Quays. It was about 3.25 then.

12) At Heron Quays, there is a lift that takes you down directly to Jubilee Place shopping centre, where we had a milk and muffin break at Cafe Nero and a loo break (very clean loos there) 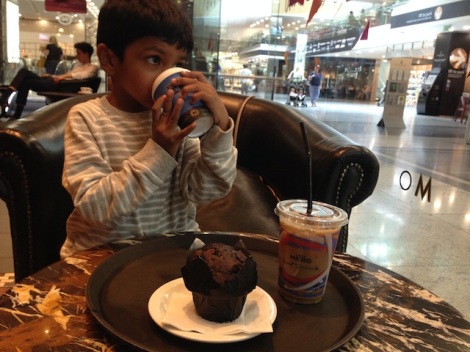 13) Jubilee Place shopping centre leads straight on to Canary Wharf underground station, where we got on a Jubilee line train at 4.05 to Baker Street. 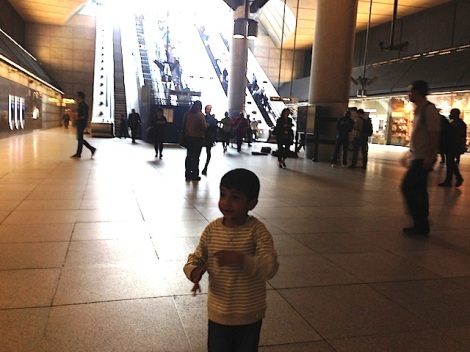 14) We arrived at Baker Street at 4.25 and walked to the Hammersmith & City/Circle line platform which was packed. So far on our journey, it was been pretty quiet, so this was the first time we hit crowds. Luckily we got a seat for the 2 stops to Paddingdon, where we arrived at 4.40.

15) At Paddingdon, Tyler shouted out ‘Our train!’ when he saw the blue trains. Ahh, Great Western Railway means home to him haha. We walked to Platform 14 and got the 4.57 GWR train to get home. Tyler promptly fell asleep on the tran – it had been a long day!

16) We got to Slough at 5.31, where I woke him and we went straight home, had showers and dinner and bed, with Tyler gushing about the day. He really had the best day ever!

You may think I’m crazy doing all this in one day being 37 weeks pregnant, but it really was his dream come true. He can’t stop talking about it and wants to do it again! For me I know it was our last day out just the two of us before Honey Nut arrives, so I wanted to do whatever he wanted to do.

If you have a train-mad child and live in or near London, this is how you do ALL the trains in one day. And it’s not that tiring as you’re sitting down for most of the day. Go on, do it!