A nice thing to do on the last day of the year is to look back on your photos, you’ll have forgotten how much you have done! I did just that this morning, and put together this collage with a photo from each month – and it was hard picking just one photo each. 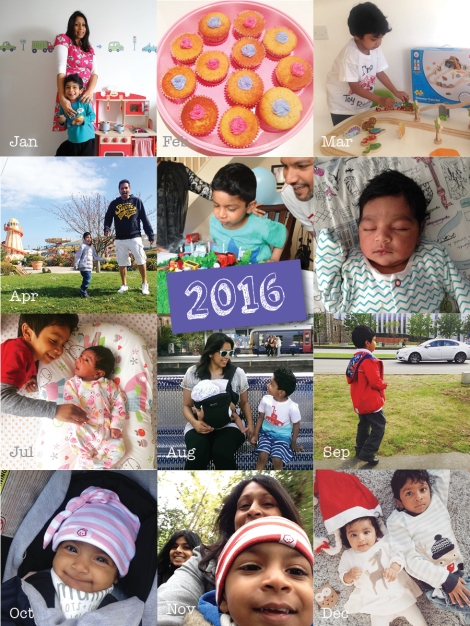 January – The year started off sombre with my husband’s grandfather passing away a few days before the new year. January was about organising the funeral and saying goodbye. With sadness came happiness for the family with the new life growing inside me. I also found out one of my best friends was pregnant too.

February – My birthday month and the month I found out that I was expecting a girl, and I had fun doing gender reveals with my coloured cupcakes.

March – The month we started being Bigjigs ambassadors and had fun reviewing their toys. I embraced my pregnancy and my sister took loads of photos of me in my maternity outfits and I was featured on Bon Prix. I took Tyler on a trip through London to meet my friend’s baby, and this helped him get excited about the baby in my tummy. We also discovered the new giant Next in Hayes Lombardy Retail Park – it’s so amazingly wow there!

April – This month was a really fun one! We went to Butlins for a little holiday, discovered the Ickenham Minature Railway which we went to every month after this. I also has a last shopping day with my besties in Westfield Stratford before the baby! Tyler started Little Kickers football classes on Saturdays, which I must say transformed the way he interacted with other children, and he really really enjoyed it.

May – My boy turned 4 and we had the best weekend celebrating with his dada, uncle and aunty. We went to the miniature ralway, had a picnic at Northalla Fields and went to Legoland. He was well happy. My maternity leave started so I tried to do as much as I could, like taking Tyler on London Transport day out twice, popping to Ikea while I still could, and finding a new car to replace my beloved mini.

June – The month Honey Nut was due! A lot of waiting around, going to my parents while Tyler still had preschool there. I had my tropical baby shower in London, and did a bench makeover for my mother-in-law. Honey Nut finally arrived at the end of the month on the 27th, with a very quick labour and her own crazy birth story.

July – This month was about getting to know our baby. Tyler had his last week of preschool and then got to know his sister. The love between the siblings was instant. Tyler had his last Little Kickers classes which I took Lily to when she was 5 days old! I also started to take them to soft play each Friday, as I was comfortable feeding her in that familiar environment. When she was 2 weeks old, I also started driving to my parents’ 3 days each week, so we had lots of sunny days in their garden. Tyler and I visited his new school, and he loved it, which was a total relief to me.

August – We had a fun week when my husband took a week off work and had lots of first days out with Lily and Tyler, going to Bekonscot, Henley, Didcot Railway Centre and Windsor. I had my first afternoon out at the miniature railway with just Tyler after Lily was born, which was a big deal. My mum looked after Lily for a few hours, it was good to have that break.

September – Tyler started school! He seemed to really enjoy it, but there were teething problems like him being scared to use the loo at school, and our after school routine was not there yet, resulting in meltdowns and me trying to look after a 2 month old too. It wasn’t that bad though and we still had fun days at the weekend, with the miniature railway and the Slough Canal Festival, and after school we started using the bus to go home which was exciting for Tyler.

October – This month was the hard one, when I felt I couldn’t cope with Lily’s crying and Tyler’s meltdowns after school, I think I fell into a bit of depression. But I snapped myself out of it in half term, with a fun family day out in London and an afternoon at the fun fair. I noticed Tyler was back to having daytime naps in half term, so I realised he was just extremely tired after school, so I’d have to figure out an afterschool routine that would mean he would get his sleep.

November – A much better month, the after school routine was sorted with dinner, tv, baby disco and bed. Lily had a baby groups routine each week, I made mum friends, everything fell into place. We went to the miniature railway one last time, went to the Fireworks display in Slough, and settled in to watch X Factor each weekend.I started weaning Lily towards to end of the month, setting up Tyler’s old Cosatto highchair, and it’s been really fun.

December – The month of Christmas decorations, Christmas jumper days, Tyler singing songs from his Christmas concert every day, buying presents and wrapping them. I love this month. We hosted Christmas at ours for the first time ever, and have been enjoying family days while my husband is off work for the week in between. A lovely end to the year..

I hope you had a good 2016 and are looking forward to the new year too! Who cares about resolutions, just enjoy life and be happy 🙂