Today I met the Queen. Well, no I didn’t, but I saw her from my window! Because you see, the Queen came to SLOUGH!

That was literally my reaction this morning, as I looked around at our road, the construction site, the potholes, the weeds – the Queen was coming here?! 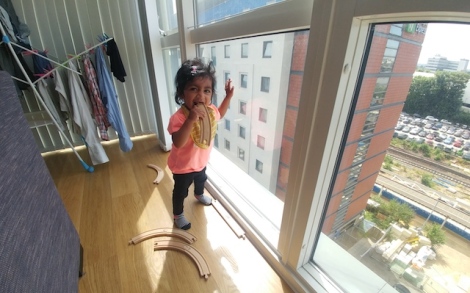 I was coming back from the school run and the road to the back of the station was lined with barriers and I had to walk in the road to get back to our apartment. There was armed police, normal police, GWR staff in green tabards, parking inspectors making sure cars would not park in front of our building. Now the police I did not bat an eyelid at, but when I saw there was parking officers – that’s when I knew something was up. They are NEVER around normally! Usually we have these annoying commuters parking all over our pavement, but today, nope!

I walked towards my building, when one angry commuter winds down her window and shouts out “Do you know what’s going on?” and a man says “The Queen is coming at 11am”

I did a 360 degree turn and went “WHAT?! The Queen is coming HERE?!” I looked around at this construction site embarrassment of a road, in shock. Meanwhile the commuter was fuming “What?! I can’t park here because the Queen is coming?!” She was so peeved off. I would have told her she’s not supposed to park there anyway as it’s a residents footpath, but I was in too much shock! 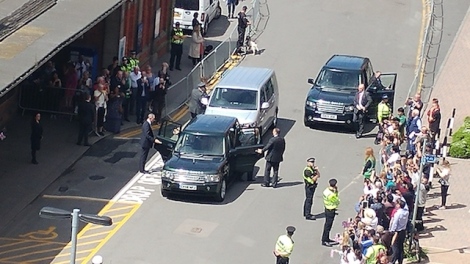 I was ready at the window at 11am, after Homes under the Hammer (good timing ;-)), Lily had just woken up from a nap, so she was in the window too, and pottering about in the living room with some snacks. But I waited nearly an hour, watching the two schools and public waiting outside the station with their flags. At first I was annoyed they hadn’t chosen Tyler’s school to attend (they are the nearest, wouldn’t that have made sense?!) – but then I thought, it’s not much fun to be standing and waiting for an hour. It was the Iqra School and St. Mary’s outside, the Marish school inside. Still, I was gutted that Tyler missed this. 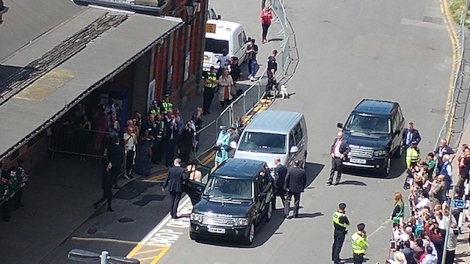 Around 12pm, the Queen arrived in this SUV, with two motorbikes in front. It happened so quickly.

She came out, greeted the children for about 1 minute, and then walked into the waiting room.

She walked through the waiting room to Platform 5. My husband joked saying she is having the tour “This is Station Jim” (you know, the stuffed dog).

We could only see the train from our window, but we could hear the cheers of the children, who had also gone on to the platform, and see photographers taking photos with their wide lens cameras from Platform 4.

The train was one of the brand new GWR electric high speed trains. It was there about 5 minutes before zooming off to Paddington.

And then it was over. The police drove off, the barriers were removed, the people and children disappeared. That was only about 5 minutes after she left, it was almost as if I had imagined it. Thank goodness I took these photos, she really was here!

For the rest of the day, my husband and I kept saying “I am the Queen” in that voice from Peppa Pig – you know the episode I’m talking about! 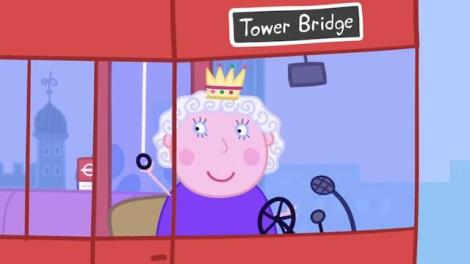 So that was the most exciting Tuesday we’ve had in a while. Has anything exciting happened in your town recently?