The other day the kids and I took a daytrip by train to Henley-on-Thames in Oxfordshire. It is a beautiful town on the River Thames (as you can guess by the name), and is well known for the Royal Regatta rowing races. But there is more to this town than rowing, and I thought I’d share with you what a daytrip is like there with kids. 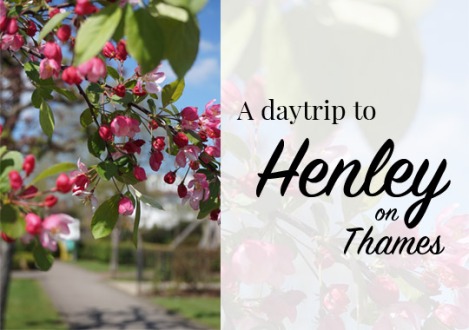 We chose Henley because it is actually a short train trip from Slough, with just one change at Twyford, and I knew there is a playground by the station that would keep the kids happy, a cafe by the river and with a bit of googling we found a toy shop to go to. All within walkable distance for Lily’s little legs (as it’s more enjoyable not to bring a pushchair on daytrips, there’s more freedom). And that’s all you really need for a daytrip with kids.

Mill Meadows Playground is literally behind the train station – which is very handy. Come out the station, turn right and you go down a little alley around the train. You’ll see the playground to the right. It is in a beautifully landscaped setting, grass and gorgeous trees – they were blossoming with pink flowers when we visited (see the main photo above!). The playground is bright and new – it only opened a few years ago, or it was refurbished, so the equipment is very clean, no rust or flakey paint. The kids spent a good hour here, and there are plenty of benches for the grown-ups. There is another separate playground for the older kids with swing ropes and climbing things. The River & Rowing Museum is a bit further on, which I have heard is good. 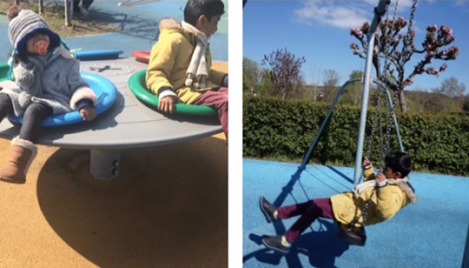 The River Thames is behind the playground, and is a lovely walk. We saw lots of boats, and a bridge in the distance. 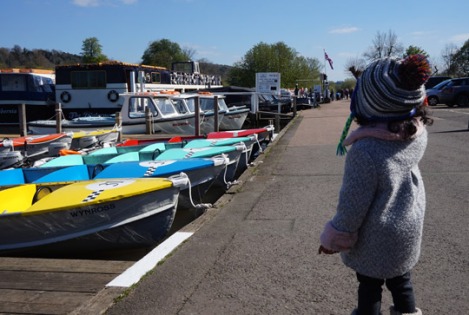 Before the bridge we got to the Chocolate Cafe, which is a riverside cafe. It was the perfect stop as the kids were peckish and Lily was feeling tired after all that playing. We were seated at a little sofa by the window, and they brought over toys. The view out of the window was beautiful, if you ignored the masses of traffic streaming past – I managed to snap a quick photo between cars! As for the cafe, it was really friendly, but the decor could do with an update – it was all very lime green from the walls to the chairs to the teacups. But it does the job, and they had loos and baby change. Lily had a nap on my lap after our snack (we had already had sandwiches on the train). When she woke, they had ice cream and then we headed out again. 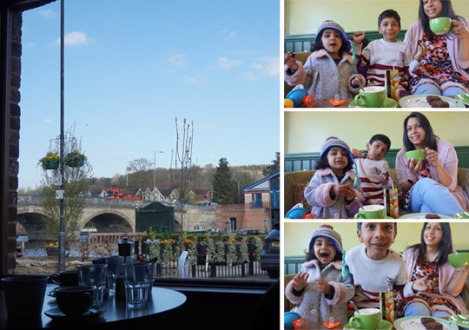 From this point the pavements got very narrow, and traffic is heavy, so I was very nervous walking with the kids, making sure we all stayed on the pavement and not fall into the road. We crossed the bridge and walked through New Street which is full of beautiful character houses and colourful doors. 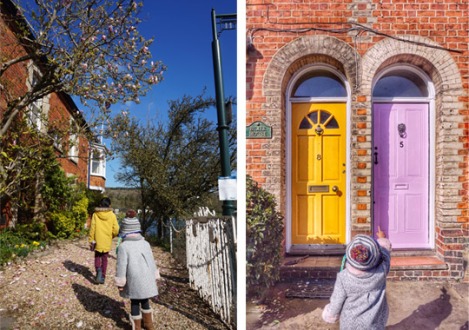 We were making our way to Bagatelle on Bell Street, which is Henley’s toy shop. It is such a cute building, with olde-style shop windows and a bright yellow door. Inside it was filled with toys, and although it’s the same stuff you get in the chain stores, there’s something a bit magic about a traditional toy shop. After a look around, we bought some playdoh. 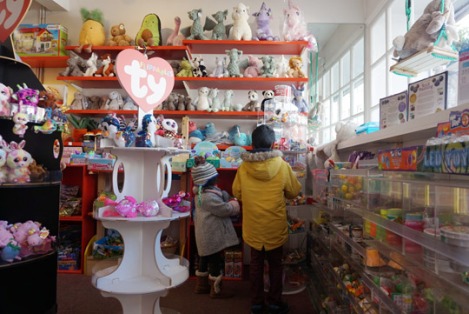 After that we slowly made our way back to the train station, popping into shops and taking pictures of interesting buildings. Bell Street is like the High Street, with familiar names like Caffe Nero, Paperchase, Waitrose, Sainsburys, Boots and there are restaurants and pubs dotted about at the crossroads with Hart Street. We stopped at a bench so the kids could rest their legs before carrying on. All in all it was a lovely afternoon out, my only negative was the narrow pavements and heavy traffic, which meant I felt stressed walking with the kids and was actually relieved when we reached the station!

How to get to Henley

From Slough train station, it costs £8.70 return to Henley-on-Thames. It’s roughly a 40 minute journey with one change at Twyford. There are lifts at Twyford if you are taking a buggy. Obviously I know not everyone who reads this lives in Slough. So for you folk who live elsewhere, the train comes from London Paddington or from Reading in the other direction. 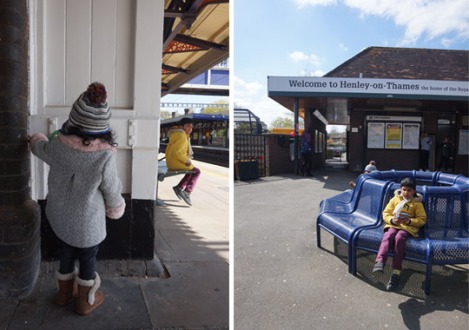 I hope you found this post useful and are tempted to visit Henley some time. If you would like some more daytrip inspiration, do take a look at my Days Out section.

3 responses to “A daytrip to Henley on Thames”