I love watching movies and making the cinema experience at home, the lights dimmed, microwaved popcorn ready and getting all cosy and comfy on the sofa. Pre children I loved going to the cinema, but with children, it’s a bit trickier to organise an evening out. Saying that, watching movies WITH your children is sooooo much more fun. I love the laughter and the bits they find hilarious, you can’t help but laugh too. So here is a list of 10 movies you HAVE to watch with your children. And I mean watch them properly, no cooking or blogging or going on instagram at the same time. These need your full attention, as actually these films are really funny!

EDIT: I wrote this post before we watched SING – and now this is our favourite kids film. It is AMAZING, both Tyler and Lily love it. Think X Factor but with animals, and a storyline that keeps you gripped, songs you can’t stop singing along too, hilarious characters including gorillas that have definitely been inspired by Eastenders. You HAVE to watch it!! 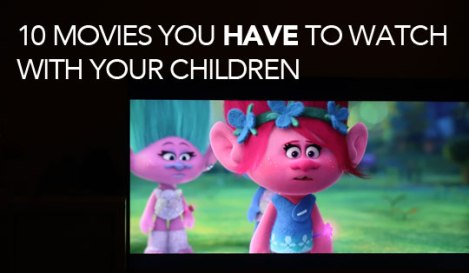 This is our new all time favourite movie of all time! I didn’t pay it any attention when it was out at the cinema, all I knew of it was that pink troll being on Tyler’s shampoo bottle. Then it came on Sky last month and it changed our life! Not only does Tyler find the whole film hilarious, Lily is even more addicted and has to dance when ‘Can’t stop the Feeling’ comes on at the end and then shoves the remote in my face so I have to put it on again and again. That’s the Justin Timberlake song, and he is a main character in this movie. The film is a twist on Cinderalla, so there is romance, and humour and so many feel-good songs that you can’t get out of your head – I am just in a good mood ALL the time now. Watch it!

Another funny film with lots of famous voices, it’s full of cute babies and bits that parents can relate too, like when the girl and the stork have to look after a baby overnight and the baby won’t sleep and they are getting increasingly frazzled and sleep-deprived in one night, and I was like THIS IS MY LIFE!! The whole film is funny, I was cracking up. Plus the boy character reminds me of Tyler – if he was a cartoon, he would look like him!

We watched this at the cinema this summer and I laughed the WHOLE way through. It is soooooo funny, and if you are born in the 80s, you will find it hilarious too. The main bad guy is stuck in the 80s, so there are so many musical references to that era. Just watch it!

This is one for the girls, Tyler has watched it twice though it’s not one he gets excited for. But when I watched it properly, I felted so empowered as a woman at the end, like I could do ANYTHING! Girl power! Plus the Rock sings in it too, which is quite amusing.

The Minions movie was a big part of my life for nearly 2 years, Tyler was obsessed with these little yellow things and would watch this film on repeat. Basically the obsession before Trolls came about. The Minions are annoying, but funny too. My favourite bit is when they are on the London Underground and a million of them burst out of a carriage, startling the commuters and shouting ‘MIND THE GAP!’ – imagine that happening in real life!! And the soundtrack is awesome, the film is based in the 60s, so the tunes are real classics.

We first knew of this film from a hilarious trailer at the start of the Minions DVD. So we were waiting to see it at the cinema, and Tyler loved it, apart from one scary bit with a python. My favourite character is the girl fluffy dog who watches Hispanic soaps and is like a dog version of a bimbo that turns all tough when she has to save her love Max. And then the main villain is the cutest little bunny who is just gangsta. Just too funny!

This is another feel-good film, that still features Nemo and his dad. There are lots of new characters, Tyler in particular likes Hank the octopus with 7 legs, because he is so grumpy. The end bit is epic, I actually sat with my mouth open at the cinema when I saw it – just wow!

This is a kids film with a deeper meaning as it’s basically touching on equality, be that for gender or for race. The main character is the cutest little bunny from the countryside who starts her new job as a police officer in the city. There are train scenes in the movie that caught Tyler’s attention. But this is definitely one the grown-ups will enjoy too.

A baby in a suit with a man’s voice – that’s just funny enough. Tyler loves it, a main part of the film being that sucking a dummy takes you to another world. So that’s why babies like sucking dummies so much 😉

This movie is just stupid funny, I was cracking up, though I do have a childish sense of humour. There is a bird that they all look up to like he is God, but it turns out he is stuck in the 80s too – lots of funny 80s references again 😀

So those are my 10 movies you HAVE to watch with your children. Or on your own – I know I do hehe!

Have you seen any of these? What is your favourite kids’ film?