Week 7 is the week we had lots of days out with both Honey Nut and Tyler for the first time, as my husband had taken the week off work for our wedding anniversary (7 years!). Usually we go on holiday each week during this week, but this year we decided to have a holiday at home and do days out instead. The first day was hard, we went to Bekonscot and Honey Nut cried in the car, and I found it uncomfortable feeding her in public as it was so crowded and hot. We took it in turns to sit with her while one of us went around with Tyler. But the next days were easier, we took the train which she enjoyed and I found it easier to feed her in Henley and at Didcot Railway Centre on the next day. She LOVES being outdoors, her eyes darting around in wonder, so lovely to watch. We did Windsor on Thursday for a bit, and then Slough on the last day doing school shopping, where she was most content being out and I don’t think it’s a coincidence as that is when she had started to take the dummy. It really soothed her.

Then the most amazing thing happened on Saturday night at my parents, after a day of holding her as I had left my baby carrier at home, she miraculously slept the night! I was fully expecting to wake for a nightfeed, so I was shocked when we woke at 6.45am and she was smiling! I could not stop smiling on Sunday, I felt like a different person, a human being that had a full night’s sleep. Of course I believed this was a one-off and did not expect it to last, but that day I wanted to enjoy it! 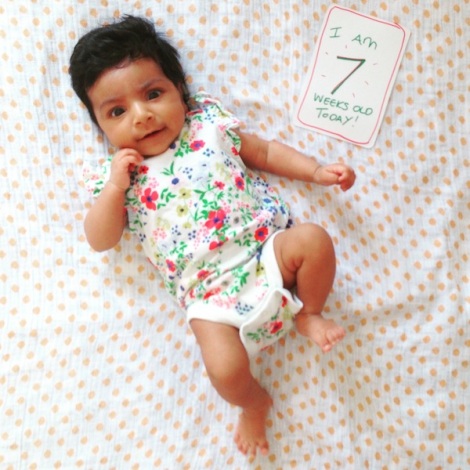 According to the Babycentre, at 7 weeks “Your baby can keep her head fairly steady now. She’s also starting to control her feet and hands instead of just waving them haphazardly. Try holding a toy or rattle up in front of her and see if she makes a grab for it. Give her a cheer when she gets it. She’ll thrive on your encouragement for the rest of her life! There’s one big change that happens around this time that will truly melt your heart. And that’s when your baby looks you straight in the eyes and gives her first smile. Now that the early weeks are out of the way, you can start to relax and have fun with your baby. So get ready for plenty more smiles!”

Yes I can agree with all that, and it is truly amazing when she looks right in my eyes and smiles. This is the week the fun begins, I started doing baby yoga and music time at home with her which she loves – week 7 gets the thumbs up from me. 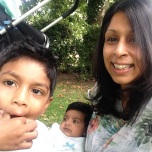 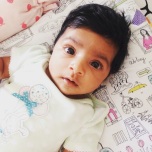 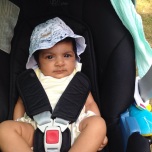 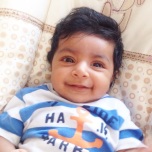 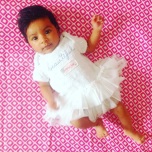 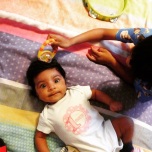 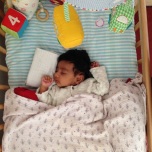 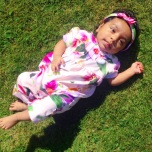 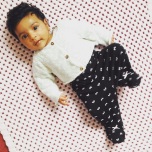 Here my diary for the week:

Day 49 – 7 weeks today on our 7 year wedding anniversary! She’s in her pretty floral vest from @ukgap that my bestie @redrose786 bought for her. What was lovely today was her waking in the morning without crying, she was all smiley and content. Still a cry-monster in the car and on our day out in Bekonscot, but as all the old people cooing at us said “this time will pass” So true, she was smiley and chatty in between the crying bits this evening.

Day 50 – we had a lovely day out in Henley – a train trip, lunch at The Anchor, a visit to the playground followed by ice cream at the river. Honey Nut really enjoyed being outside and the train journey back, she was gazing away. I brought the baby carrier with me as well as the buggy, so when she cried I put her in the carrier and she calmed down. It really was a relaxing day out, maybe it does get easier the more you do it!

Day 51 – Honey Nut went on her third day out this week. We went to Didcot Railway Centre, and she really enjoyed being outside again. It was very hot today so we were all a bit irritable though! Back home I’ve started doing baby yoga with her on her playmat, I remember the moves from when I did it with baby Tyler. She seems to like it!

Day 52 – it’s been a mixed bag of a day for Honey Nut, I think the hot day made her irritable and not able to sleep, but in between she LOVED the train journey to Windsor, her eyes were huge in total wonder! And I still got a smile out of her. This top is one of Tyler’s, it was my fave seaside one.

Day 53 – we all woke up in a good mood this morning, it helped that is wasn’t so hot – I was actually glad for the rain. Honey Nut napped in her chair so I got to play trains with Tyler. We went out school shopping and then had a break in Starbucks where she was happy and kicking in her pushchair. She was so good! It helped that she took to the dummy today. Last night I was watching my babies sleep, amazed that they are both here at last. She was wearing a vest that I bought after I had a miscarriage in 2010. I used to wander around H&M and TK Maxx in Brixton touching all the baby clothes, and I bought a pack of vests hoping one day. When you want something for so long, sometimes I think I am dreaming. I kissed and cuddled her loads today. She’s beautiful so I put her in her beautiful tutu vest from @nextofficial that a lovely family friend bought.

Day 54 – we popped round to Nana’s house today and had a little music time for Honey Nut, getting Tyler’s baby rattles and maracas out – she really enjoyed it. She’s spent most of the day in my arms apart from then, as I’m scared to put her down in case she cries. Her daytime naps are so light, she wakes as soon she’s put down!

Day 55 – I could not stop smiling today because by some miracle Honey Nut slept the night from 9.30pm – 6.45am. I have no idea how it happened or if it was a random one-off, we’ll see tonight! It was just so nice to have a full nights sleep, the first time in 2 months! She’s still been a drama queen during the day, but I seriously don’t mind. It was cold this morning so she’s wearing her Next cardi and bottoms that were a gift from my cousin. And the pink blanket she’s lying on was hand-knitted by my sister’s friend’s grandma! So lovely of her! 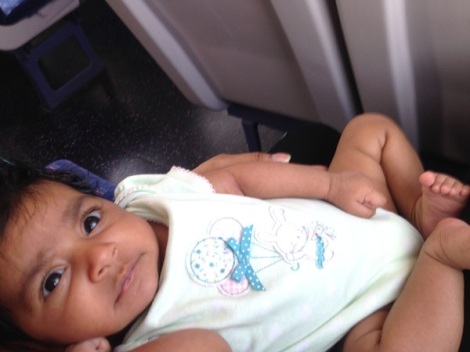 This is the “let mummy take a photo of you on your last day as an 8-year-old” pose. My babies growing up, I swear they were just born!
𝘢𝘥 - 𝘱𝘳 𝘱𝘳𝘰𝘥𝘶𝘤𝘵
My first wisteria hysteria photo with me in it, I’m so happy. You would not believe how busy it was at this moment.
🌸CAFE WITH A PLAYGROUND 🌸
💜 COCKSHERD BLUEBELL WOODS 💜
#ad A FIESTA for your tastebuds - have you seen the New Mexican themed range from Pizza Hut Delivery? We were so excited to try it! There’s Chicken Fajita Pizza and Filthy Steak Pizza. You can get Nacho Cheese Stuffed Crust too. There’s also Loaded Chicken Fajita Nachos and Chicken Fajita Chunks. So good!