Please note this post was written in 2016 – the maternity unit at Wexham Park Hospital has since been refurbished as such will probably be completely different from what I have written!

At the start of Week 35, I had booked on to the hospital tour at Wexham Park Hospital in Berkshire, just so I could see what the Labour Ward and Birthing Centre looked like. It runs every Sunday morning and you have to phone in advance to book a space. So at 10am, I arrived at the hospital and waited in the antenatal waiting room with some other couples. I had left my husband with Tyler at home, as it was Sunday morning and they were still in their pjs.

A Health Care Assistant called Emma came along, checked the register (there were about 6 couples) and then showed us around. She took us to the maternity ward, and pointed out where neonatal and triage was on the ground floor, and then took us into the actual Labour Ward.

It was really quiet, and we went into the first room. They have 10 labour rooms altogether. It looked like a normal hospital room, with a hospital bed in the middle, monitor to the right, chair and sink to the left, and a shower room. Each room should have a CD player, but this one just happened not to. But she said if that happens on the day, you just ask for them to bring one in. In this ward, you will have access to an epidural, pethidine and gas and air for pain relief. The room looked very clinical, and quite small compared to the room I had giving birth to Tyler at Kings College Hospital, but then again, they had ran out of rooms when I was in labour first time – so it’s better to have 10 smaller rooms I’d say!

The Labour Ward is for when you are a high risk mum-to-be. If you are low risk, you need to go to the Birthing Centre.

This is upstairs on the first floor at Wexham Park Hospital. While most people took the stairs, I got in the lift with another couple – well we are pregnant! Upstairs opposite the lift is the postnatal unit. And then we walked to the right down the corridor and this led us to the Birthing Centre. Again it was really quiet and no one was in labour while we were there. I was amazed, I expected it to be a busy and stressful environment, but it was quiet, peaceful, a few midwives in the centre. I was very busy asking questions and taking it all in, as I was quite nervous about labour, so I totally forgot to take pictures! But I have drawn out what I remember so you can get an idea.

There’s a big reception area in the middle with 2 water bath rooms and 3 normal rooms off the centre – so 5 altogether. If it is full when you are in labour, you’ll be put in the labour ward. So I really hope it’s quiet when I’m in labour. The walls were coloured lilac or light yellow – I can’t remember, but it was more homely and pleasant than the labour ward.

There are 2 Water Birth rooms in the centre, and we went into one on the left which looked like this: 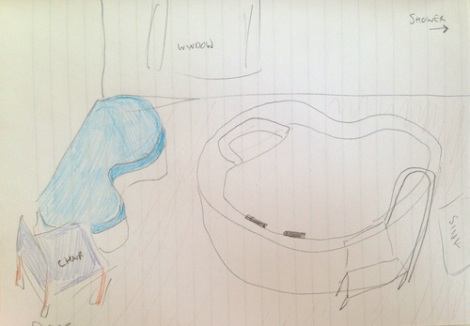 Inside the first thing you notice is the huge bath.  It has steps with a pole to get in, as I was thinking how on earth do you get in while you’re in pain. There’s a dip at the edge which is for the midwife or birthing partner to sit on with their feet in the water. Your birthing partner can also get in the water but must have swimming shorts on. There was two handles for holding on to in the bath. Emma said they fill the pool up to a warm temperature and they also offer aromatherapy oils such as tea tree oil or lavender. You can also have gas and air here. There’s a CD player, and they also have an iPod dock locked up which you can request.

Some women go in the bath for pain relief but actually get out and go on the bed to give birth (that’s the curved blue thing in my drawing!) There was also a shower room off this room. I asked what you wear for a water birth, and you can wear whatever you like, a bikini top, t-shirt, some women like to go naked (no thanks!), and obviously nothing on the bottom half.

This is a leaflet we got given on water birth at Wexham Park Hospital, which you might find useful if you’re thinking about having a water birth: 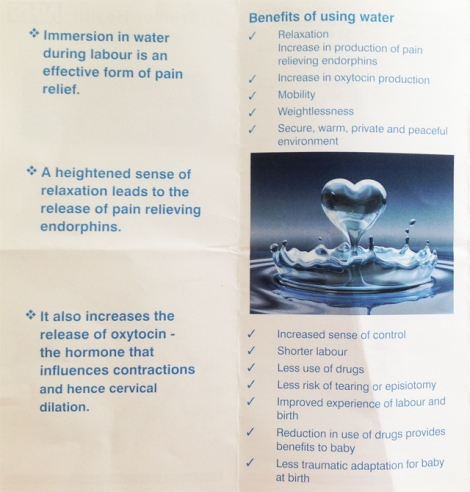 Next we went into a non-water birth room, of which there are 3. It’s a small room with a curved bed, a birthing ball, a CD player and shower room off it. 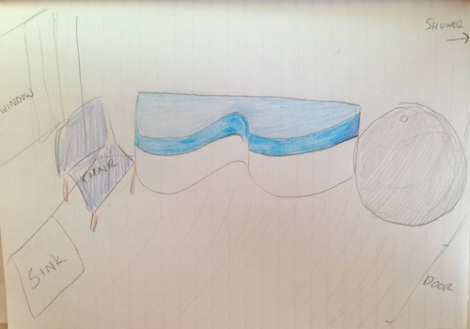 The bed confused me, I asked why it was curved. She said basically women like to kneel on the floor on kneeling mats in the curve, with head and arms on the mattress. It’s all very active compared to the labour ward. Here’s the leaflet we got about pain relief available at the birthing centre – basically you can’t have an epidural here: 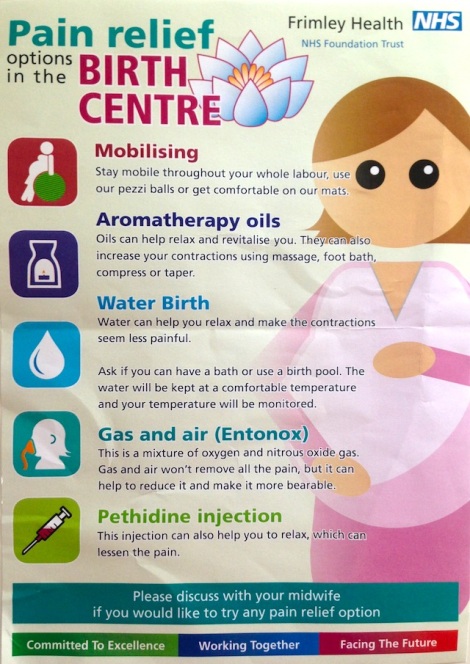 I was a bit freaked out about these rooms as there was nothing to hold on to. When I gave birth to Tyler, I was kneeling on a hospital bed, and holding on for dear life on the arms on the metal headboard thing. That’s is what I remember, holding on so tight for each contraction and pushing. Afterwards I mentioned that to Emma when the others were leaving, and a lovely midwife came over and talked to me about my concerns which was really nice. She said what most women do here is kneel on the floor and hold on to the edge of the mattress, or have their arms folded with their head resting on the arms.

But she really recommended the water bath for me, as it has handles to hold on to it in the bath. She said she had one, and she’s seen lots of beautiful births here. I told her why I had never considered one, like isn’t it all mucky with all the blood and stuff, and what do you wear?! Anyway she talked to me more about it, and the more I looked at the room without the others there, the most peaceful and relaxing it seemed. She said I could wear a bikini top or a T-shirt, whatever I like. And I could have gas and air if I wanted. That’s what I had with Tyler, and it really helped me.

So that was nice of her to talk me through things. I definitely felt a lot better and am considering a water birth now.

Anyway, that was my tour of the Labour Ward and Birthing Centre at Wexham Park Hospital – I hope it’s helpful to anyone thinking about giving birth there, and if you want to book a tour, just call this number 01753 633147 and a midwife called Lynette should answer. It sometimes rings and ring, but I got through around 11am on a weekday morning.

If you’ve been been or are pregnant, did you do a tour of where you gave/will be giving birth? What pain relief do you think is best and what do you think of a water birth?

UPDATE: There are no electrical sockets in one of the water birth rooms, so if you want music, make sure you have something battery operated to play it on!