Week 27 came a couple of weeks ago – the last week of the second trimester. And did I feel it! Suddenly the tiredness came back when I’d be out and about, having to sit down and rest like every 10 minutes. I knew the burst of energy would not last, oh well. On the plus side, it’s litereally countdown time now!

And with it being countdown time, I started to think about labour, and it’s about time I got mentally and physically prepared. I did a pregnancy yoga exercise from YouTube, planning to do one every day – that didn’t happen. I must make myself do it! And I started researching Hypnobirthing books. The classes are really expensive, and to be honest I can’t sit through these sort of classes without laughing, so I’d much prefer a book. But after reading mixed reviews about the Marie Mongan book, I wasn’t sure I wanted to spend the money if I might not like the book either.

I had a look at the Slough library catalogue, but they don’t have any hypnobirthing books – hmm, not impressed with that. Then I had a look at the Hillingdon library catalogue and they had loads across their libraries. At the weekend we went to the Ickenham Miniature Railway, and whilst there, I nipped into Ickenham Library and took out the Sophie Fletcher Mindful Hypnobirthing book.

I’ve been reading a section each day and have downloaded the tracks to listen to, and my body does relax as I read it – so I am impressed with it so far. It’s sort of training your mind to know how it’s going to deal with the pain – or intense feeling as I’m supposed to call it – when I’m in labour. And that’s really what I’m looking for.

The next day I did a bit of online shopping and ordered 2 mattresses for Honey Nut’s little cot (one for home and one for at my parents). We still have the cots from last time, but I wanted new mattresses for the new baby. I also ordered a yellow yoga ball and maternity leggings from Mothercare, as my old ones are tearing at the inside leg! They are not going to last much longer, so new leggings are an essential!

At 28 weeks, I had to fast from 7pm on Sunday night for 12 hours, drinking water only, for my gestational diabetes test the next morning at 7.40am in Wexham Park Hospital. I had a panic feast between 6pm and 7pm, eating Thai Green Curry and Rice for dinner at 6.15pm, then stuffing my face with cakes and the melt-in-the-middle chocolate pudding the Ganesh got for me, and my fruit juice, all with 1 minute to go at 7pm! I was so stuffed, I fell asleep for an hour and a half. Then watching TV that evening, I didn’t feel hungry at all, though it was weird not snacking, and I wasn’t hungry in the night either – phew!

In the morning, Ganesh worked from home to watch Tyler while I was at the hospital. I drove there at 7.30am and it was really quiet and eery. The test was in the Antenatal Unit, and there was one girl in front of me who was there for the same reason. I was called in by a really friendly nurse, we got chatting about Tyler and her daughter who is pregnant and all sorts. She took my bloods really carefully, and she even folded the edge of the plaster so it would be easy to take off after. She also took bloods for my midwife appointment the next day, so there was one less thing to do tomorrow. I had to drink this glucose drink, which was really sweet but left a horrible aftertaste. Then I had to wait in the waiting room for 2 hours, and should have been called back for second bloods to be taken at 9.45am. 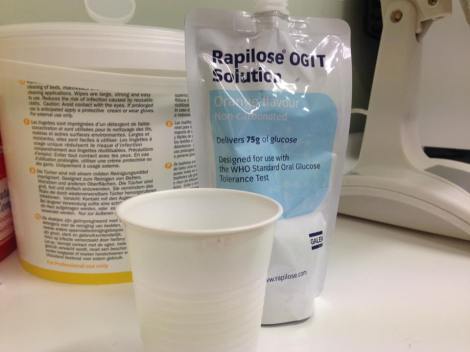 I hooked on to the hospital wifi and did some blog reading and commenting for one hour. I moved seats quite a bit, as when they put the hospital TV on at 8.30am it was really loud and getting busy in the waiting room. I found a quiet corner and listened to my hypnobirthing tracks, which relaxed me a bit. 9.45am came and went, and the girl who was in front of me still hadn’t been called.

At 10.15am she got called, and then like a minute later I got called. There was a different nurse and another patient in the room. The atmosphere had changed from calm to stressed. The first nurse I saw came back in and saw the other lady, whilst the other nurse was telling her how they are running late and she’s late for a meeting. She’s asked me which arm I want, and I said do the other one, she said, if’s thats what you want, like she really couldn’t care less and just jabbed the needle in my arm! It stung, she put a cotton wool on and slapped micropore tape on – gone was all the care! I checked the label on the bloods to make sure she’d written my details correctly, and she said the results would be in the post in a week. And I could go home. Car parking charges were £4.50 – ouch!

At home, Tyler greeted me with “MUMMEEEEEE!!! Did you have fun shopping?” – so cute. I explained that I was at the hospital and showed him my arms and my growing bruise from the jab. I had some cereal and then felt really dizzy. So I lay down and slept for a few hours. Lucky Ganesh was home to keep an eye on Tyler, although he was so good, I could just hear him playing along side me sleeping.

The next day I had a 28 week midwife appointment. She had my blood test results which all were fine, my urine was fine and my blood pressure was fine. Tyler was still fascinated with the blood pressure machine. I lay on the couch and she felt my bump and measured Honey Nut – 27cm which is good. And then we listened to the heartbeart which was 144 – good apparently. Tyler laughed and giggled so much at the heartbeat, it was nice to see him excited. He really does understand there’s a baby in my tummy now. Such a change from the earlier days! On the chart, Honey Nut is measuring between the 10% and 50% percentile, so no probs there.

The rest of the week flew by at work, with Honey Nut’s movements feeling stronger and stronger. The only unwanted symptoms I’ve been having this week is burping up sick every evening. It’s not enough to be actually sick, but it’s in the my throat and just yuck!

I was given a leaflet by the midwife on the whooping cough jab, so I’m going to phone up the GP to get the vaccination. I’ve got a scan at 29 weeks – it’s not a routine scan, it’s just because Tyler was a small baby, they want to check Honey Nut’s growth. So I’ll let you know how that goes in my next update!

UPDATE: The results are in – I don’t have gestational diabetes, yay!!!

𝘢𝘥 - 𝘱𝘳 𝘱𝘳𝘰𝘥𝘶𝘤𝘵
💦 PADDLING BEACH AT DENHAM COUNTRY PARK 💦
I can’t believe it’s already been a week since our staycation, where does the time go?! I have to share these photos from the pier at Worthing - is this the brightest bench you’ve ever seen? And it talks! There was lots of art on the pier, the colours were amazing, the views were amazing. Oh to be by the seaside again 🏖
🎉 AFTER SCHOOL FUN AT @jumpintrampolineparks 🎉
Oh hello, it’s me! 👋 Just thought I’d do a re-introduction post for anyone that’s just starting following me. So, I’m Sabrina, mum to two in Berkshire. It’s a passion of mine to share things to do in my local area with the kids. When I moved to Slough 7 years ago, I found it really difficult to find out about activities so I thought I’d document them in my blog. And it’s hopefully been useful for other parents who move to the area!
🐠 SEALIFE BRIGHTON 🐠